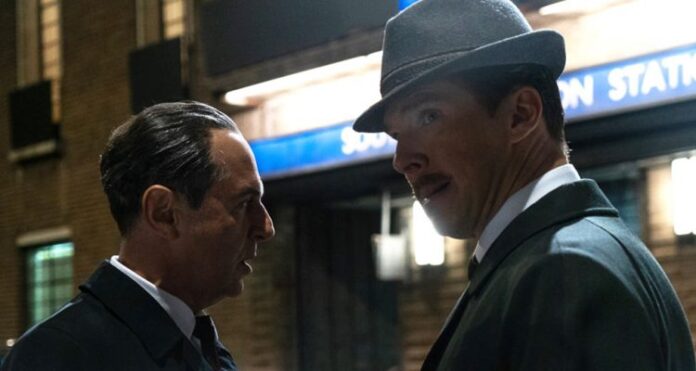 Greville Wynne is a name most people have probably never heard of, unless they are particularly interested in MI6 spies who secure the greatest informant in British history. Okay, I guess when it’s put that way people should be interested in his life, as Wynne’s was one seemingly designed for the big screen. However, despite a solid, understated performance by Benedict Cumberbatch and an even better one by Jessie Buckley, The Courier (formerly Ironbark) is drab and does little to make Wynne the larger-than-life figure needed to tell this otherwise familiar tale of espionage.

It’s the 1960s and the height of Cold War tensions between the West and the Russians, and Wynne is just another stuffy British businessman trying to make a profit in the midst of all of it. During his travels to Eastern European countries, Wynne often makes contact with high-level figures within the Russian government. That, combined with his apparent restlessness, as expressed to his wife Sheila (Buckley, underutilized but still great), made Wynne the perfect choice to make contact with Oleg Penkovsky (Merab Ninidze), a mole who has passed information to the American embassy that he’d like to work with them, out of concern for Soviet Premier Nikita Khrushchev’s heated rhetoric.

The script by Tom O’Connor prefers to tell us things about Wynne rather than show. The amateur spy is trained by MI6 and CIA handlers Dickie Franks (Angus Wright) and Emily Donovan (Rachel Brosnahan), but it mostly amounts to dull conversations about what not to do. The real-life Wynne insisted he had actually been recruited back during WWII, something I wish the film had addressed or incorporated head-on. It’s also suggested that Wynne is a bit of a ladies man with a partying lifestyle, but other than one scene he shares with Penkovsky he never comes across as anything more than a boring suit ‘n tie guy, with Cumberbatch’s understated, buttoned-up performance doing him little favors in the charisma department.

That, ultimately, is the biggest problem with The Courier. Wynne simply isn’t that interesting on his own. He doesn’t seem to be particularly patriotic, or especially close to his family although. The chief relationship in the film is between him and Penkosky, who become close friends as they pass thousands of classified messages to one another, making them an especially prolific team. But the personal connection they forge also increases the danger they’re in, and thus the threat to Wynne and Penkosky’s families.

Where the film, and Cumberbatch, excel is in the evolution of Wynne from an unaffected figure into someone who is willing to risk everything to protect not only his friend but the peaceful life he has built. In the beginning, Wynne sees the whole thing as something of a joke, or a game he’s been recruited to play. Surely, this mission he’s been tasked with can’t be dangerous otherwise they’d never ask someone like him to do it. But as his trips to Russia increase, and the threat level rises, the toll it takes on Wynne becomes clear in his attitude and in his physical shape.

This physical transformation would be seen again in more extreme terms later, with Cumberbatch resembling little more than a skeleton with some skin pulled tight over it. He’s committed himself to the role, that’s for sure, and while Wynne still comes across as bland it’s not due to a lack of effort by Cumberbatch. Buckley doesn’t get much to work with in a largely thankless role, but adds a real legitimacy to everything she’s given.

The Courier is directed by Dominic Cooke, who previously helmed the British drama On Chesil Beach. Like with that film, Cooke doesn’t dress anything up and leans heavy on the actors to breathe life into it. You wish there was a bit more sizzle to go along with this steak, but it too often turns out as exciting as a cup of lukewarm tea.

The Courier opens in theaters on March 19th.