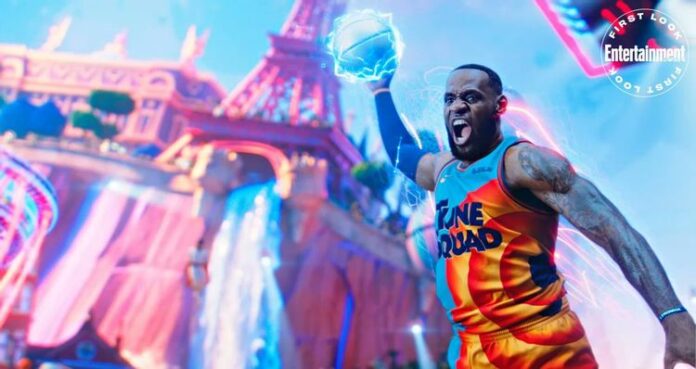 Forget about the points, the rebounds, the assists, and the number of championships. There’s only one way to truly decide whether Michael Jordan or LeBron James is king of the court, and that’s who has the better Space Jam movie?  After years in development, and a change in directors from Terence Nance to Malcolm D. Lee, Space Jam: A New Legacy is finally here. The film stars James and is a followup to His Airness’ 1996 hit in which he plays b-ball with Bugs Bunny, Daffy, Lola Bunny, Taz, and more to defeat the alien Monstars. Well, James’ problem is a little bit different.

It turns out that Space Jam 2 is basically LeBron James playing basketball in a virtual reality world, facing a team called the Goon Squad to rescue his son (Cedric Joe) who has been trapped there by a rogue A.I. voiced by Don Cheadle. James will need to reassemble the Toon Squad if he has a prayer of winning this game.

My advice is always the same: pass the ball to Daffy.

Also in the cast is Sonequa Martin-Green as James’ wife, while we know loads of celebrities from the NBA and Hollywood will turn up. Not only that, but this being a Warner Bros. film, there will be appearances by characters ranging from Batman to Mad Max. What the fuck is Mad Max gonna do? Is he on the post-apocalyptic team?

The film is being described as a father/son story primarily, something James and producer Ryan Coogler spoke with EW about…

“The general idea was the examination of Black fatherhood and how fatherhood could be unique to LeBron James specifically,” Coogler said.

James added, “There are parents who want to push their kids to do certain things because this is what they do, but sometimes you have to look into a kid and be able to have an open mind and ear to help them become the thing they’ve dreamed of.”