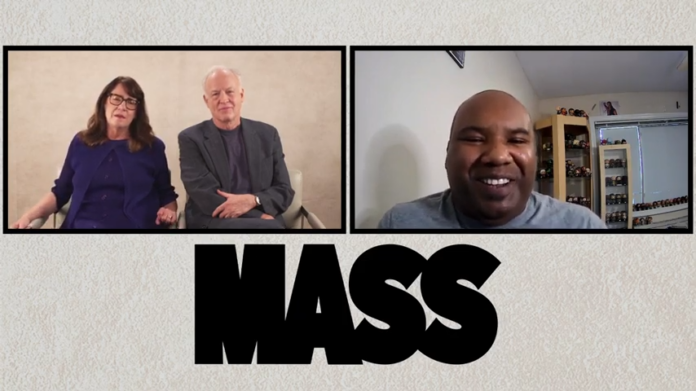 The only bullets fired in Fran Kranz’s directorial debut, Mass, are emotional ones. This intimate, but devastating drama takes place in the aftermath of a school shooting, where the parents of a murdered student interact have a dialogue with the shooter’s parents. The hope? To discuss their incredible grief, to find healing, to find a way forward from a tragedy that has dragged them down for years.

Not an easy subject, for sure, and probably the last film anybody would expect from Kranz, best known for his comedic roles in The Cabin in the Woods and the TV series, Dollhouse. To help pull off a film that is all about the human drama, Kranz enlisted some of the best actors around: Jason Isaacs and Martha Plimpton who play the victim’s parents Jay and Gail, plus Ann Dowd and Reed Birney as Linda and Richard, whose son was the shooter. 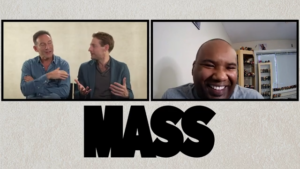 Through all of the pain, the anger, the guilt, the resignation, what Kranz ultimately delivers is a story of hope that people can come together and emerge from the darkness.

I was fortunate to have a chance to speak with Kranz, Dowd, Birney, and Isaacs about Mass. Kranz spoke about his motivations in tackling such a hard topic, while the actors talked about the process of wrapping their minds around characters who have been through so much. In the case of Isaacs and Kranz, we also had a funny, but brief, chat about their lack of Funko pops, which was a pretty nice icebreaker considering the weightiness of the movie subject!

Mass had its world premiere earlier this year at Sundance and will open in theaters on October 8th.