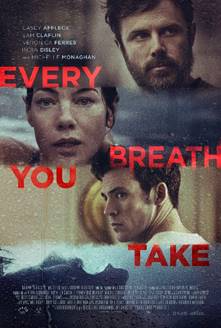 In the works for nearly a decade, the psychological thriller Every Breath You Take is finally set for a theatrical and PVOD release this month courtesy of Vertical Entertainment. The film boasts a cast led by Casey Affleck, Michelle Monaghan, Sam Claflin, Veronica Ferres, and India Eisley, with Terminal director Vaughn Stein behind the camera.

Penned by David Murray, the film stars Affleck as a psychologist whose career is throw into turmoil when a patient commits suicide. Claflin plays the patient’s brother, who tears apart the doctor’s personal life when he’s invited into the family home to meet his wife and daughter.

Long described as being in the vein of Cape Fear, the film was previously eyed by directors Rob Reiner and Christine Jeffs (Sunshine Cleaning). Harrison Ford and Zac Efron were also attached to star at one point, so the project has undergone some significant changes over the years. Affleck and Monaghan find themselves reunited after starring in Gone Baby Gone together back in 2007.

Every Breath You Take will open in theaters and premium VOD on April 2nd.

Every Breath You Take is a searing psychological thriller about a psychiatrist (Casey Affleck), whose career is thrown into jeopardy when his patient takes her own life. When he invites his patient’s surviving brother (Sam Claflin) into his home to meet his wife (Michelle Monaghan) and daughter, his family life is suddenly torn apart.

Sundance Review: ‘The World To Come’