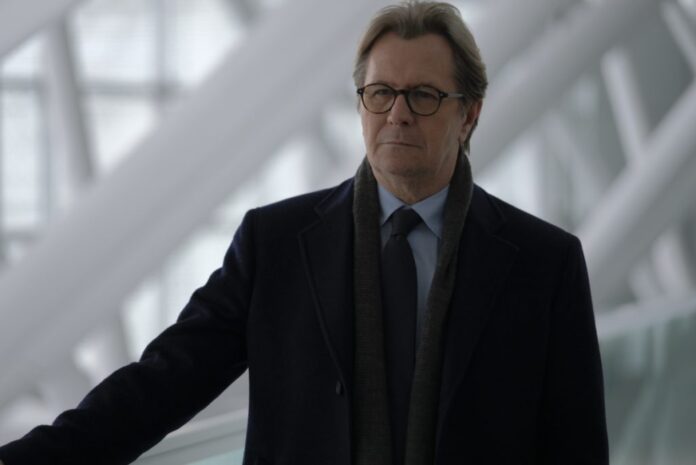 Another movie about the opioid epidemic? They’re coming at us fast and furious, with most tackling the issue on either a micro or macro level to varying degrees of success. Nicholas Jarecki attempts both with Crisis, a multi-faceted action-drama offering multiple storylines in the vein of Syriana and Steven Soderbergh’s seminal drug war film, Traffic. The approach works to identify many facets of an evolving national healthcare issue, from the personal all the way up to the business and governmental levels. It’s a frequently gripping multi-faceted plan of attack that Jarecki has come up with, even if we’re left feeling he has taken on too much.

Crisis is bolstered by a cast that any filmmaker would kill for. Oscar winner Gary Oldman, Evangeline Lilly, and Armie Hammer (I personally thought his off-camera problems would hinder the film’s release. It might’ve actually helped.) lead the way as principles in three interconnected narratives. The film begins like a scene out of Sicario, with a fentanyl smuggler taken down by police as he tries to cross the Canadian border. Pulling on this thread introduces us to DEA agent Jake Kelly (Hammer), who is THIS CLOSE to nailing a Montreal drug kingpin he’s been working deep cover for a year. Further down the line is Claire (Lilly), a former addict herself, she sees the opioid crisis hit her Detroit home in an all-new way when her seemingly-perfect son disappears one day. Connected to all of this is professor Tyrone Brower (Oldman), whose lab discovers that a supposed non-addictive pain killer making its way through the FDA is actually quite addictive, and extremely deadly, if misused. But his lab is very well paid, and Tyrone must decide whether being truthful is worth losing that funding and possibly his career.

As far as sprawling social dramas go, Crisis delivers the facts while also having a clear and passionate point of view, something the director may have gotten from his brother Eugene Jarecki’s documentary, The House I Live In, which also tackled the drug epidemic and biases within a system meant to help addicts.  So we get purely villainous characters like Luke Evans’ smug pharma exec, who does everything including bribery to convince Tyrone to keep quiet. Failing that, big money starts getting thrown around to discredit Tyrone, professionally and personally, while he finds himself screaming into the wind about how this is “the biggest public health crisis since tobacco!”

There are plenty of clunky, melodramatic scenes like that one as Jarecki threads the needle between fact-based drama and Hollywood-style thriller. Jake’s cop, of course, has a personal stake in this because his sister (Lily-Rose Depp) is an addict who is shuffled in-and-out of rehab in a vicious cycle recently highlighted in the movie Body Brokers. Claire, upon hearing of her son’s fate, sets out on a detective mission of of her own, which threatens to not only upend Jake’s investigation but get herself killed. While fairly generic with tropes of the genre, there’s an energetic snap that keeps Crisis from becoming a dry, message-heavy exercise.  Jarecki keeps the tentacles of this massive opioid scandal simple enough and fast-paced enough that audiences can easily understand without experiencing too much drag.

Only Oldman’s plot struggles to feel connected to the larger whole, perhaps because Tyrone’s struggles are more systemic rather than street-level. He faces the juggernaut of Big Pharma, but also his school’s dean (Greg Kinnear) who considers Tyrone a friend but wants to keep those donations pouring in. With so many storylines converging, plus a few more that feel extraneous, Crisis generalizes in broad strokes and fails to shed light on anything we don’t already know.

It’s been a long nine-year wait since Jarecki’s previous film, the gripping financial world thriller Arbitrage. In that time, Jarecki’s stylistic confidence has never wavered, nor has he grown timid in putting his point of view out there. Crisis is a big, bold effort and while it’s hardly groundbreaking on the subject of opioids, Jarecki’s investment in the material and the commitment he’s able to get from his actors is such that it better not be years before we see his critical eye on another timely subject.