Earlier this year, way back in March, The Hunt was released, a supposed a satire that dissected modern identity politics and political infighting, the film didn’t really provide any new commentary about the political divide. In an unlikely turn of events, a small British Independent film goes where The Hunt couldn’t. Taking place in the Scottish Highlands and centering on four wayward boys way in over their head, Get Duked! says something smart and hilarious about class and age politics every step of the way.

After bad behavior in school, drugs, petty crime, and arson, friends Dean (Rian Gordon), Duncan (Lewis Gribben) and “DJ Beetroot,” (Viraj Juneja) must spend the weekend completing “The Duke Of Edinburgh Award,” a four-day excursion in the Scottish highlands focusing on camping, teamwork and survival skills. Joining them is goodhearted homeschooled nerd Ian (Samuel Bottomley), who plans on actually completing the challenge rather than spending it goofing off and getting high like the others plan to do. However, a mysterious Duke (Eddie Izzard) starts to follow the group on their journey, wearing a mask of what seems to be human skin.

Get Duked is a wild and debaucherous romp through class and age politics that will have you laughing and thinking at the same time. The script is tight and succinct, popping off one-liners and clever visuals at the drop of a hat. What Get Duked! does well is that takes these modern conflicts, Gen Z vs Boomer, the poor vs the rich, and takes party platforms out of the equation, using humor to examine those issues fully and freely. It’s bloody and grotesque at times, but director Ninian Doff does an exquisite job finding a way to take those elements and still get his voice through, especially with his colorful editing. It’s like if “The Most Dangerous Game” met Shaun of the Dead met Superbad. 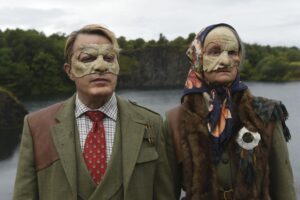 Though the young cast purposefully comes on a bit strong, Eddie Izzard plays his duke character with just enough force not to overdo it. Full of panache and pomp and circumstance, Izzard strikes the perfect villainous note, not too cartoony and buffoonish with the right amount of terrifying realism. The supporting cast is full of great Scottish and British character actors like Kate Dickie (Game Of Thrones), James Cosmo (Braveheart, Highlander), and Kevin Guthrie (Sunshine on Leith, The English Game), and Doff wisely uses all of his cast to split focus away at just the right moment, right before any character gets too grating.

While well-made and smart, the film can feel a bit overwhelming and loud. However, if dark comedies and satire continue down the road Get Duked! is paving, them we are in for a fun and wild journey.

You can watch Get Duked! on Amazon Prime. Watch the trailer below.