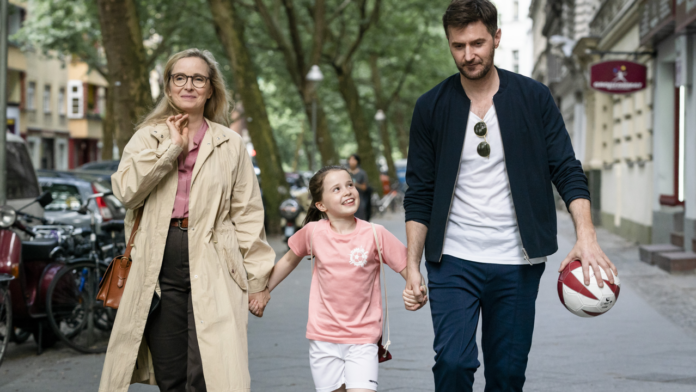 Scientific advancement and ethics have always been debated on screen. In the new film My Zoe, written, directed and starring Julie Delphy, the pain of raising a child combine and inevitable scientific advancement combine to try to demonstrate the lengths a mother will go to protect and be with her child.

In My Zoe, Delphy plays Isabelle, a newly divorced mother living in Berlin and working as a geneticist. Her ex-husband (Richard Armitege) is a loving father who uses their child as a way to control his ex-wife. When something life changing happens to their daughter Zoe, Isabelle must determine whether a life without Zoe is worth living or if she can use technology to change it.

Delpy is almost directing two movies here. The first a family melodrama, focusing on two toxic parents battling for custody. In the film’s last forty percent, it switches to sci -fi drama on the ethics of cloning. That latter forty percent, feels completely rushed and instead focusing on the moral intricacies of creating a cloned child, Delpy completely brushes past it. As a writer, Delpy is not able to capture the nuance of the subject matter in the film’s 105 minute runtime. Stories that flip genres part way through always do better as a novel or even a tv show where more of the characters’ motivations can be worked out further. The Delpy version feels rushed and not left open to debate, like a melodramatic Black Mirror movie.

My Zoe is full of solid supporting performances. Richard Armitage is able to make the narcissistic and toxic ex-husband into something actually relatable and someone endearing. However that might be easily done considering Delphy’s own performance is often one note after the first twenty minutes of the film. Daniel Brühl and Gemma Arterton, two underrated but always reliable actors, are completely misused in the film, regulated to that final forty percent. This is where the miniseries format would have elevated the piece. Used even less is the great Lindsay Duncan, appearing in only two scenes. Her role as Isabelle’s mother seems to effect neither plot or character development, begging the almost unforgivable question of an actor of Duncan’s caliber, was she even needed in the first place?

The concept of My Zoe works in theory. It’s an intricate story worth telling, but film is not the medium to tell it. On the technical side, Delphy delivers a solidly edited and visually constructed film. In theory, this film would work and be groundbreaking. Unfortunately My Zoe’s execution keeps it from resurrection.

My Zoe is in select theaters now and on demand May 25th. Watch the trailer below.