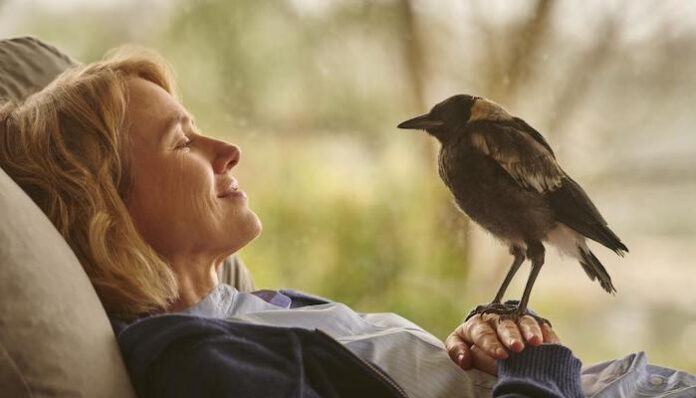 The story of a paralyzed woman who bounces back with the help of a curious, equally-broken bird named Penguin sounds like either SNL parody fodder, or something discarded in the “bad idea” bin at the Hallmark Channel. And yet Netflix’s Penguin Bloom is a real story, taken from the memoir by Cameron Bloom, about the time following his wife’s freak injury. While it holds your hand through every emotional beat, and rarely colors outside the lines of expectation, there’s earnestness and charm in this fine-feathered family story of hope and togetherness.

The Bloom family are Australian, and fortunately, the film has two terrific exports leading the cast. The Walking Dead‘s Andrew Lincoln is photographer Cam, while Naomi Watts is Sam. Along with their three sons, the Blooms are nature enthusiasts, lovers of the water, generally outdoorsy-types. They swim, surf, travel, and do it all. And it’s during a trip to Thailand that Sam suffers a freakish fall from a balcony that shatters her spine, leaving her paralyzed from the waist down. Considering what happened to Watts in Thailand before in The Impossible, perhaps her characters are best leaving that country out of any vacation plans.

Penguin Bloom, and Watts in particular, does a very good job capturing the despair, the despondency, that paraplegics face. Sam can barely work up the energy to get out of bed and into her wheelchair most days. It’s not that she can’t physically due it, but mentally she isn’t able to face being a completely different person than who she was. She can’t even stand to look at old photos of herself, someone she no longer recognizes. Sure, Cam is there to care for her, do the little humiliating things like help go to the restroom, but having to rely on him is humiliating. A particularly painful moment comes when the boys get a case of food poisoning, and as they cry out for help in the middle of the night, they don’t call for her at all, knowing that she couldn’t come even if they did.

The discovery of an injured magpie, which they name Penguin because of its black and white color, sets Sam and the entire family on a new path. The little birdie is a nuisance at first, constantly cawing out in need of attention. Penguin flies freely throughout the Bloom home, and seems to be there during all of their high points and low, becoming a part of the family. This being a light-hearted family movie, director Glendyn Ivin and writers Shaun Grant and Harry Cripps, focus on the joyful aspects of having Penguin around; such as playing with the kids’ toys, and becoming, in a way, like Sam’s support animal. Magpies are among the most intelligent birds in the world, and this focus on Penguin’s connection to the Blooms will be very rewarding to those who take an interest in corvids.

Watts is a tremendous actress and she has a lot to carry here, considering her main co-star can only chirp back in response. She beautifully depicts the complex jumble of emotions Sam faces, not wanting to hurt her family but also resenting them for their concern. Lincoln is also good as Cam tries to be all things at once: husband, caretaker, friend, all while concerned whether he’s doing too much or too little. Their relationship is strangely platonic, however, perhaps in an attempt to keep this as all-ages as possible. It just feels a little weird that he barely touches her other than when she needs aid. Jacki Weaver is a welcome presence as Sam’s doting mother, whose concern launches an argument that is interrupted only by Penguin being attacked by other birds.

And this is a big problem for Penguin Bloom. Of course, Sam’s recovery mirrors that of Penguin, and we are never allowed to miss a beat because everything is explicitly spelled out for us. Sam begins to take up kayaking (her instructor played by Rachel House, a Taika Waititi favorite), a sport she will eventually become a medalist at, but only after Penguin begins learning to fly again. As Sam and Penguin mend on parallels tracks, they’re so in-sync it’s a wonder they don’t take to the skies and fly out of the nest together. I guess that would be one step too far off of the branch.

‘Penguin Bloom’ Trailer: Naomi Watts Overcomes Tragedy With The Help Of A Magpie