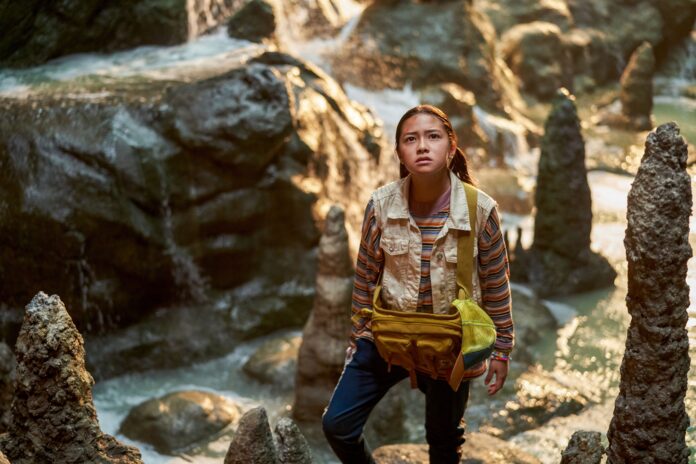 A ragtag group of kids. The search for a long-lost treasure. This is that Goonies sequel everyone has been begging for, right? Nope, it’s Finding Ohana, a new family adventure film coming to Netflix. The big difference between this and the Richard Donner classic? It’s set in Hawaii, so you know it’ll be prettier to look at than Astoria, Oregon.

Okay, there are other big differences between this film and Goonies. For one, the lead character in Finding Ohana is a…geocache champion. What’s geocache? Think of it as hide ‘n seek using GPS coordinates, or like finding special items in a role playing game. Anyway, that geocache talent will be put to the test in finding a pirate’s shipwrecked treasure.

Geocache champion Pilialoha “Pili” Kawena, age 12, is abruptly lifted from her busy New York life and dropped into rural O’ahu to help care for her grandfather. Initially skeptical about her new surroundings, Pili finds a cryptic pirate’s journal in her Papa’s studio hinting at a 200-year-old shipwrecked treasure hidden away in the island’s caves and mountains. With her older brother and new friends in tow she uses her clue solving skills to lead them on an adventure of a lifetime through the natural wonders of Hawai’i. As she learns to respect and love her native culture she also discovers not all secrets should be shared and that the real treasure in life is ‘ohana – her family.