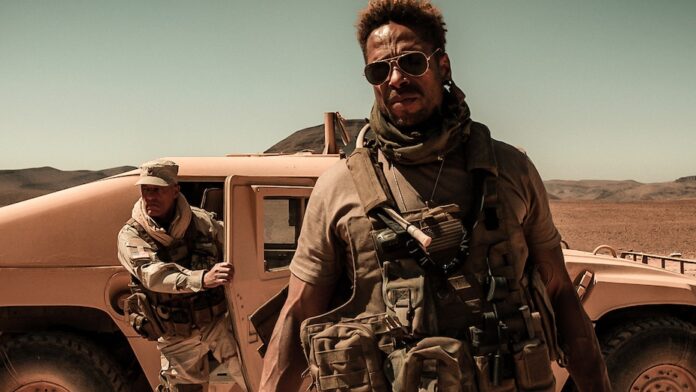 Over the next year and a half, the movie release schedule is going to look very different from what we are used to. Since the coronavirus has halted many productions, releases won’ stop per say but we will see a rise in subpar filmmaking. The new film Redemption Day, though a valiant attempt at a 90s action film, fails to be entertaining, which is the one thing that this kind of film has to be. Starring CSI alum Gary Dourdan, Serinda Swan, with supporting roles from Andy Garcia, Ernie Hudson, and Martin Donovan, this wartime hostage thriller directed by Hicham Hajji feels stale.

Dourdan plays Brad Paxton, a U.S. Marine who has just returned home to his wife (Swan) and daughter after a botched humanitarian mission in Syria. Trying to cope with PTSD, his wife Kate is an archaeologists, who leaves shortly after his arrival to go to Morocco on a dig. While there she accidentally crosses the Moroccan border into Algeria and is taken hostage by Islamic terrorists. Once he hears the news Paxton leaves to bring his wife back with the help of diplomats, military allies and Muslim priests.

Redemption Day feels dated.  The film’s score pushes the over the edge. The script harkens back to a late nineties action film, filled with clichés and B movie mumbo-jumbo. Hajji, who shares co-writing credit with Sam Chouia and Lemore Syvan, can’t seem to create consistent tension throughout the piece. The pacing is slow (until it confusingly isn’t) and severely lags in the last 30 percent of the film.

Despite a solid performance from Dourdan, his Paxton is not given much to do once he makes it make to the Middle East. His subplots about his marriage and being Muslim himself feel like were thrown into the script half-heartedly. The great Andy Garcia also really doesn’t do anything as the American ambassador helping Paxton find his wife. Ernie Hudson plays Paxton’s father and again is given nothing really to do. If you’re going to use Andy Garcia and Ernie Hudson for their notoriety, make sure you actually utilize them.

When we finally get some action sequences towards the end of the film they feel cheesy and drawn out. Hajji tries his best to throw in some surprise twist and turns at the film’s conclusion, but can’t seem to make them work. Feeling routine and mundane, Redemption Day is a grim reminder of what’s to be released in the next year.

You can catch Redemption Day in select theaters now and on-demand January 12. Watch the trailer below.