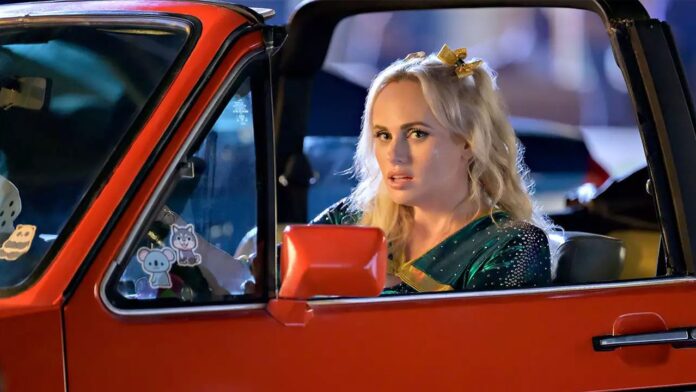 The ’90s were especially rich in quirky high school comedies, and there are worse things to crib from than 1999’s Drew Barrymore rom-com Never Been Kissed. And that’s what the Rebel Wilson comedy Senior Year tries ever so hard to do, with its lead playing a former high school queen bee forced by improbably dumb circumstances to relive her senior year and become popular. But at every turn the believably nostalgic aesthetic is trampled by a witless script and an aggravating lead performance by Rebel Wilson.

Wilson, so good as smart-alecky support, is out of her depth as the lead where there is no escape from her whiny style of delivery. Things are much better while following the younger version of her character, dorky Aussie student Stephanie, is played by the wonderful Angourie Rice. Stephanie starts out unpopular, with a hanger-on crew of fellow nerds, but she is determined to end her high school years on top. And she does it! Becoming cheer captain was a big step, overcoming her frenemy Tiffany, and eventually winning prom queen with her crush, Blaine. Well, that last step would have to wait after a gnarly fall during a cheer routine knocks Stephanie into a coma.

20 years later, and Stephanie is now a 37-year-old woman with the outlook and personality of a 17-year-old. Naturally, her first instinct is to pick up right where she left off, and conveniently, nothing is too far out of reach that she can’t. Tiffany (now played by Zoe Chao) is still around and mean as ever, only now she’s  unhappily married to Blaine (Justin Hartley) who has grown into a major idiot constantly on the prowl. Her best friend Martha (Mary Holland) is still socially inept but now works as a principal at the high school, while her other friend Seth (Sam Richardson), who secretly carries a torch for her, is the school librarian. Some easy laughs are scored with Stephanie’s confusion over the era; she thinks Lady Gaga is Madonna, she wants a Real World inspired prom, and cell phones are like something from the future. The biggest insight seems to be that schools nowadays are too “woke”, when back in the day you could really tart it up on stage or at cheer in short skirts and skimpy outfits. Instead, cheerleaders nowadays aren’t that cool, the smart kids rule, and it’s all topsy-turvy. Yeah, that’s about it. Credit does go the writers for the way they handle some of the new terminology that someone like Stephanie wouldn’t understand, specifically the words she can’t say anymore for fear of insulting entire marginalized groups.

It all just feels bland and familiar, with a script credited to three writers (!!!) delivering lazy characters and no true story arcs. Of course, Stephanie does grow from being popularity-obsessed to a mature woman eyeing the future, but the transformation is literally overnight after a brief conversation with, >sigh< , Alicia Silverstone in a truly sad cameo from the star of Clueless, another film Senior Year cribs from but can’t hold a candle to. Instead, what the film does is hurl nostalgia at you, including an abundance of Britney Spears, although a “(You Drive Me) Crazy” dance video is pretty funny for appearing completely out-of-place and with no comment whatsoever.

And so Senior Year never comes close to reaching the heights of the movies it wants to emulate: 13 Going on 30, Big, and Never Been Kissed. The humor is broad and scattershot, but also pretty timid. Chao, so good at playing caustic characters, is given no venomous dialogue despite playing a character perfect for it. Richardson’s Seth has a classic “unrequited love story” familiar to any fan of the John Hughes era of high school comedy, but what’s the point of doing that now if you aren’t going to give it a modern spin? Senior Year is content with reminding us of things from the past, but earns a failing grade at not making them funny for right now.