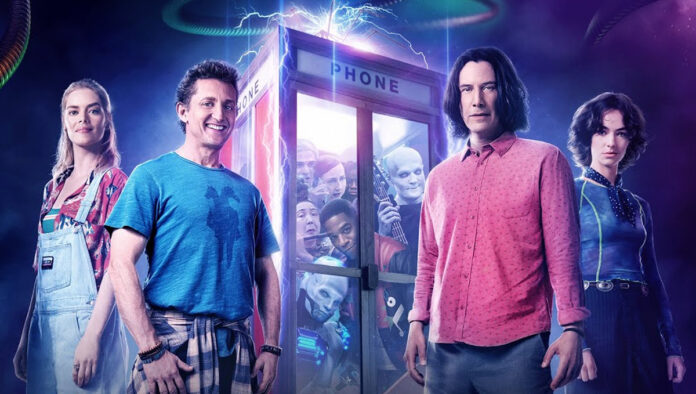 The arrival of Bill & Ted Face the Music didn’t energize me the way it did fans of the cult favorite 1980s comedies, Bill & Ted’s Excellent Adventure and Bill & Ted’s Bogus Journey. While fun, the dufus “whoa” brand of humor they and similar films shared has never really been my bag. Besides, a third movie in the sci-fi franchise has been talked about for almost two decades, so what were the chances this one would be worth the wait for one thing, or be able to turn me into a Wyld Stallyns disciple?

Turns out, Bill & Ted Face the Music is a most excellent adventure indeed. Keanu Reeves returns as Ted Theodore Logan, having shaved off the John Wick beard and reverted back to the slacker idiot persona that nearly defined his career. He’s joined by Alex Winter, dug up from out of nowhere (I know he’s been around, but not in a big way) as Bill S. Preston.  Together, they pick up right where they left off in a goofy time travel story that rewards the franchise’s longtime fans, celebrates a love of music, and potentially sets up a new generation of unlikely heroes.

Directed by Dean Parisot with a script by creator Ed Solomon and Chris Matheson that has been pretty much laid out since 2010, the film is an unabashedly sweet and stupid story about our two heroes, forced to grow up way before their time…even though they are now middle-aged men. Bill and Ted are still way too close, which is odd for their medieval wives Princess Joana (Jayma Mays) and Princess Elizabeth (Erinn Hayes), who has settled into domestic normalcy. The guys are still rockin’ out, even though their careers haven’t really taken off and the Wyld Stallyns are doing wedding parties and playing bars. The song they were prophesied to write that would unite the universe? It never happened, either, although they thought their previous hit single might have been it? Nope. Very wrong. On a catastrophic level.

Without the legendary song, Bill and Ted are tasked, by Rufus’ daughter (Kristen Schaal) to write one before the universe goes kaboom, and they’ve got…oh, a little over an hour to do it. What transpires is a silly romp through Bill and Ted’s past and future selves to find the song, showing everything that might’ve been and could be. It’s a fun way to relive their many treks across time while acknowledging the passage of it. This isn’t a movie looking to reboot the past and start over, but to embrace everything that came before no matter how ridiculous.

It would’ve been easy to simply rely on nostalgia, but there’s a real effort to pass the baton and chart another course.  The movie actually doesn’t focus solely on Bill and Ted’s adventure but is split pretty squarely between their daughters Thea (Samara Weaving) and Billie (Brigette Lundy-Paine). The apples don’t fall far from the tree. They dress like their dads, talk like their dads, and think too much like their dads. They also time travel like their dads. Years after Bill and Ted assembled some of the greatest leaders in history, now their daughters must meet some of the greatest musical influences, including Jimi Hendrix, Louis Armstrong, and more.

The girls’ trek through time is actually a more enjoyable journey. Much like in the first movie, there’s an excitement and wonder as Thea and Billie experience space/time for themselves, with their friendship growing along the way. It’s been a while, but we’ve seen that narrative before between Bill and Ted, and while the duo can still rock a mean air guitar, their frequent encounters with versions of their failed selves just doesn’t strike the same chord as a mad dash through musical history.

This movie has been a very long time coming, and I never thought for a second that it would actually happen. But now that it has, I can’t help but marvel at how easily everyone slides back into familiar roles. Solomon and Matheson’s script just knows these characters so well; even when we see Bill and Ted in the far off future as old men, we just know they wanna jump out of their retirement home beds and rock out one more time. And guess what, that’s exactly what they do! It must’ve been like slipping on an old familiar pair of shoes for them. Their friendship is both hilariously dumb and poignant in its longevity and loyalty. While the dudes struggle to say it correctly, there’s a lot of love goin’ on.

Even kept at a brisk pace, the film overstuffs a lot in order to bolster a thin plot. I guess it’s keeping with tradition because all of the Bill & Ted movies suffer from the same problem. A killer android in need of a soul, a physics-spouting Kid Cudi, and a much-needed reunion with Death (William Sadler, clearly relishing this moment) are just a small part of what is crammed into the final act. There’s so much going on that we lose what makes this movie works best, which is Bill and Ted and Billie and Thea, who are practically crowded out of their own movie.

If there’s one thing I did really enjoy about the earlier films, and is replicated flawlessly here, is the wild, unfettered lunacy is unlike any other comedy. The Bill & Ted films move to the beat of their own drum and make you believe the amount of sheer stupid crap they do can actually save the universe. Once you’ve bought in, it’s really hard to get off that train and I was fully along for the ride, even one that takes place in a phone booth. Remember those? Not to bring too much real-world crap into it, but sometimes a movie that is just sweet, idealistic, and yeah, a whole lotta dumb, is just what is needed.