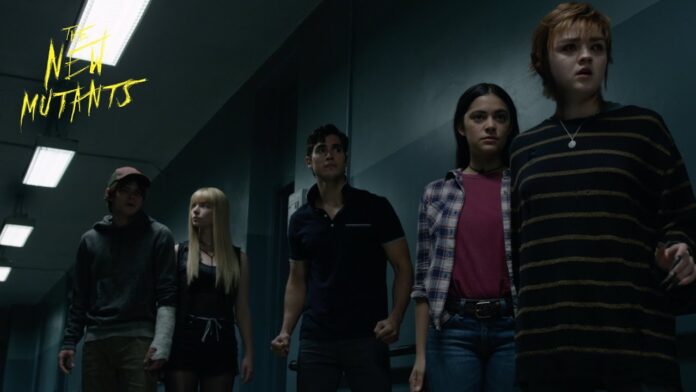 Is it possible to review The New Mutants without going back into its long-troubled history? Maybe so, if the film didn’t constantly remind you of it at every turn. Shot way back in 2017 and originally due to open a year later, this dreary super-powered thriller bears the signs of old age, mostly in the cast but also in generic tone that could’ve used a fresh update. But those going in expecting a complete disaster given the circumstances, and unceremonious dumping by Disney in the midst of a pandemic, will find that it’s at least a serviceable superhero horror story that might’ve led to an envelope-pushing franchise if things had gone another way.

Directed by Josh Boone, whose claim to fame The Fault In Our Stars was another tale of teen angst, The New Mutants was envisioned as a sortof Breakfast Club meets The Dream Warriors, coming off the wild success of It and Stranger Things. The idea of a horror movie centered on super-powered teens isn’t new but rarely captured on the big screen, and the premise has a ton of potential that is only marginally met. Boone gets the balance all wrong; the scares aren’t nearly impactful enough and the teen bonding waylaid by embarrassingly  clunky dialogue.

The New Mutants is the dreary final gasp of Fox’s once-mighty X-Men franchise, really the standard bearer of the genre before Marvel Studios came along. References to the adult heroes are everywhere, and fans of the films will dig the surprising connectivity, some direct and others teased for sequels that will never happen. Boone and co-writer Knate Lee pull this off without the film ever really leaving its single location, a decrepit psychiatric hospital ripped straight out of Shutter Island.

The story is largely told from the perspective of Dani Moonstar (Blu Hunt), a Native American girl whose entire reservation was decimated by a supernatural force. She wakes up in the facility and in the care of Dr. Cecilia Reyes (Alice Braga), who appears to be the lone adult and staff person. She watches over Dani, perhaps too closely, and the other mutants in her care. They include Illyana Rasputin (Anya Taylor-Joy), a demonic teleporter with a chip on her shoulder and plush dragon friend fans of the X-Men comics will recognize immediately; Sam Guthrie (Charlie Heaton), a Kentucky native with propulsive powers; Rahne Sinclair (Maisie Williams), a shy, devout girl hiding a feral side; and Roberto da Costa (Henry Zaga), a Brazilian rich kid who likes to heat things up in more ways than one.

Dani’s arrival doesn’t just disrupt the close-knit group, it triggers nightmarish flashbacks to each’s terrible origin, and the reason they are all locked away. Reyes constantly reminds the students, and us, of how dangerous they all are, and why it’s important they be “sequestered” from the rest of society. The comics were always a metaphor for the changes that take place within us all at puberty, which happens to be the time when mutant powers emerge. The film holds true to that idea, as well, and Boone runs with it as best he can but on a couple of occasions reverts to using clips from Buffy the Vampire Slayer to fill in the emotional gaps. That iconic TV series is clearly another major influence visually, with some of the creatures that emerge into reality resembling season 4 ghouls The Gentlemen, and a much darker color palette.

What it’s lacking is an equal amount of light-hearted socializing to balance the film’s heavy sense of dread. Other than a brief sequence where the kids take advantage of a drugged Reyes to frolic in the attic and play Truth or Dare, we don’t get to see enough of them figuring their way through just being teens. While the framework is new, The New Mutants pulls elements from the comics while also introducing some interesting twists on the characters. Each character’s backstory remains mostly intact, from Sam’s tragic coal mining experience to Rahne’s demonization as a witch, but they’re presented in such a perfunctory way that we find little reason to care. Some of the edgier aspects Boone introduces, such as a lesbian romance between Dani and Rahne, are a good idea but too often handled with kid gloves, probably so as not to tempt an R-rating.

Most of the cast were rising stars at the time of filming and have since gone on to bigger and better things, but it’s still interesting to see them at this formative stage of their careers. For many of them, this was the biggest movie they had done at the time, and none seem overwhelmed by the experience. Blu Hunt is probably the least recognizable face, and capably shoulders the greatest emotional burden as the most naive member of the group. The one having the most fun is clearly Taylor-Joy as the Soulsword-wielding Illyana, rocking a bad attitude and a scary Russian accent. It’s a shame they didn’t manage to work in that her brother is X-Men mainstay Colossus, but I’m assuming that was being held for future stories.

Reportedly budgeted at around $80M, it’s clear Boone was feeling the strain to make the movie look as good as possible. There are only a couple of really big set pieces, but the biggest, a confrontation with the monstrous Demon Bear, you can see the wheels, or in this case the fur, starting to come off. It hurts what is actually an impressive showdown, with Illyana slicing her way through the demon realm of Limbo, and each hero getting to unleash their full potential.

The New Mutants is almost certainly the end of the line, and Boone doesn’t do enough to justify its inlcusion as part of the Marvel Cinematic Universe. It’s a shame because,  given the nature of the script, the team could easily be made to fit without much trouble. And the cast are all good enough they would warrant being brought back, especially Taylor-Joy. Perhaps, when Marvel decides to reboot The New Mutants, as they inevitably will, they’ll ask her to pick up the sword again.