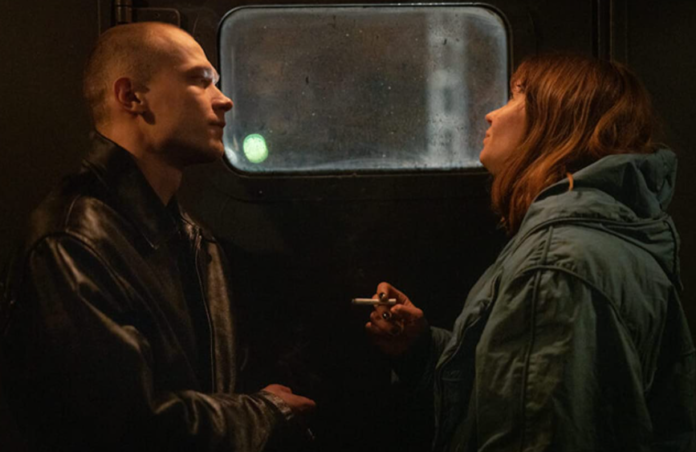 Compartment No. 6 is a romantic drama that introduces a new perspective of culture and how a pair of unmatched individuals sharing a train compartment find love.  Something new for me as most films of Russian influence that I’ve seen typically consist of horror, war, or depicted as villainous gangsters/characters. I don’t particularly care for love/romantic stories all that much however, this film draws and taps into something more. Something that almost feels like it’s rapidly approaching nonexistence, good ole’ fashioned – human connection. Compartment No. 6 is the second feature film written and directed by the Finnish filmmaker Juho Kuosmanen. The film was adapted from the popular 2011 Finnish novel by Rosa Likson which later won the Grand Prix at the 2021 Cannes Film Festival. Kuosmanen debuted his first feature film in 2016, The Happiest Day in the Life of Olli Mäki.

Set in the 1980s and during the final day of the Soviet Union, two lonely passengers find themselves sharing the same path and train cabin while traveling through Russia. Laura (Seidi Haarla) is a Finnish archeologist studying in Moscow and is about to travel to the Arctic port city of Murmansk to examine petroglyphs. Recently discovered prehistoric art that’s been etched into the rocks along the shoreline. She had planned to go with her lover Irina (Dinara Drukarova) but Irina had backed out at the last minute for…work. Irina can’t wait to get Laura out the door despite Laura really wanting more clarification and direction with their relationship. Grappling with confused emotions, Laura finds comfort with her walkman set and a camcorder she uses to catalog her journey from Moscow to Murmansk. She carries a stiff persona and keeps to herself (rightfully so considering she’s traveling alone) and boards the train to Compartment No. 6 where she meets her travel mate, Russian hard-ass Ljoha (Yuriy Borisov).

Ljoha is also traveling to Murmansk but his journey entails looking for mining work rather than studying petroglyphs, let alone pronouncing them correctly. Laura is roughly and rudely welcomed into their shared cabin. Right away Ljoha pops out a collapsible cup and starts downing what I presume to be cheap Russian vodka. It’s not long before he’s hammered and crosses the obnoxious and drunken danger zone. Laura flees the cabin before shit gets too crazy and desperately searches for a way into another cabin. She even tries to pay female conductor Natalia (Yuliya Aug) to let her sleep anywhere else. Natalia, who is clearly someone who’s been doing her job a long time and doesn’t take any shit from anyone, declines. Laura reluctantly returns to Compartment No. 6 to find that Ljoha has passed out. Keeping her possessions close she decides to do the same.

I, like Laura, am thinking “how am I going to make it with this guy in the same cabin as me”?! Misery, fear, and constant paranoia are the first things that come to mind. Right away it’s uncomfortable but this is where the film gets pleasantly interesting for me. The cinematography already has me reeled in as the camera brilliantly squeezes through the narrow train and compartment style stuffed with passengers kind of setting. The retro technology, heavy rolled cigarette smoke, and astringent alcohol provides an overpowering ambiance and reminder of a time before the turn of a new generation. Laura is unknowingly escaping an enigmatic love affair in Moscow by boarding a beat up train. She’s forced to share a tiny sleep car with a rowdy Russian miner who, through their shared adventure, both eventually discover the truth about their own yearning for human connection.

The acting with the cast is incredible. Borisov and Haarla have fantastic chemistry. Their relationship blossoms into an unexpected twist of self discovery that meets perfectly in the middle to achieve a balance of new found love and happiness. I especially loved Broisov’s range of acting talent. You’ll want to hate him for being the typical asshole who has no respect for boundaries to growing more and more enthralled by his character development. He possesses a boyish charm that lies hidden underneath a harsh exterior but is willing to reveal that part of himself as he spends more time with Laura. In turn, Laura learns to lighten up and more about herself than she had ever realized before. I thoroughly enjoyed the raw truth, realism, and grittiness of Compartment No. 6 and I highly recommend giving this film a watch.

Compartment No. 6 opens in Washington DC on February 18th.