Home News Images Every Second Of The New Teaser For ‘Fear The Walking Dead’ Is...
Facebook
Twitter 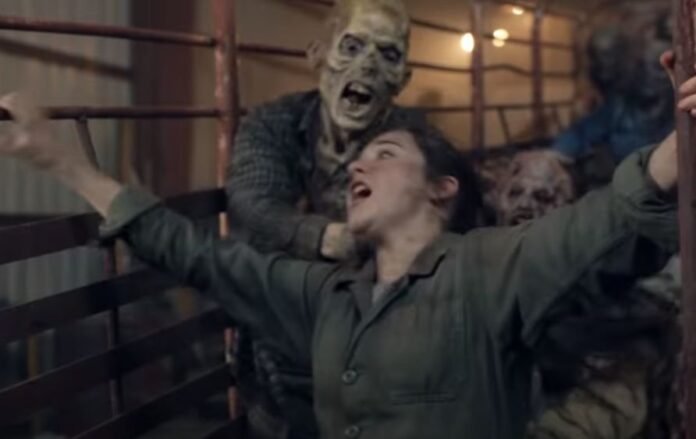 The Comic-Con panel for Fear The Walking Dead was full of fun, tid-bits, and most importantly a 1 minute teaser for the upcoming sixth season. Full disclosure, I fell off after season one of FTWD. At least four times I’ve tried to catch up, and I’m always super into it but I just can’t commit…no clue why. That being said I may add a fifth try after seeing this teaser. The teaser debuted during a virtual panel with stars Alycia Debnam-Carey, Colman Domingo, Jenna Elfman and Rubén Blades and several other series stars. The clip itself is only a minute long and I have no idea who most of the characters are but here’s what I can tell you it’s absolutely packed with awesome looking zombie action and, possibly more importantly, it shows a world that I want to really understand more which isn’t something I’ve felt with it’s parent show in a while. There’s shots of traditional wilderness zombie apocalypse sure, but there’s also plenty of civilization in differing levels of structure. Oddly, the thing that interested me the most was a shot of an oil rig spewing oil. It’s the little things, I mean our whole modern world runs on fossil fuels at the moment so why wouldn’t that be one of the first things they tried to do.

The big surprise of the panel was the announcement of a release date for the premier, October 4th, 2020. While that’s about 4 months later then FTWD usually premiers the fact that they can release while quarantine is still in effect is great news. They have six episodes shot and almost complete so the winter break may end up being longer then usual getting new content anywhere is a huge deal these days. Lastly it was confirmed that the series would depart form it’s single narrative structure and become something of an anthology series following smaller groups of characters. Changing up the game is key to keep anything zombie related fresh. It’s been almost 20 years since 28 Days Later and Shaun of the Dead revitalized the zombie genre so keeping things new and exciting is the only way to keep going.

No news about The Walking Dead‘s season finale, which was not aired during the usual run due to COVID. Thoughts are still pointing to it being released later this year.

For more great coverage of this year’s Comic-Con click here!