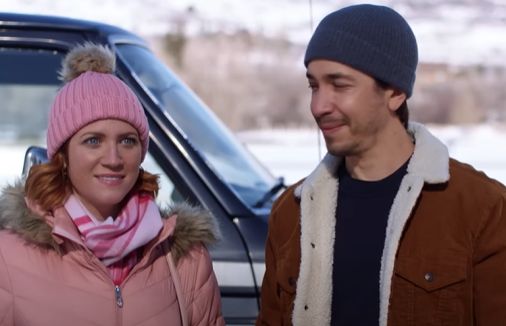 Are Red Band trailers still a thing? You know, the trailers who have a red screen instead of a green when they start to let you know things are about to get adult? It doesn’t seem to be with the trailer for Brittany Snow and Justin Long’s upcoming film Christmas With The Campbells which definitely caught me off guard. I didn’t expect the trailer for a sweet Christmas rom-com to end with a scene where someone tells George Wendt of Cheers fame to “pull out your d*ck”. That’s not a criticism, this movie seems downright hilarious. Sweet, with just the right amount of salt. I guess I should have figured as much since the trailer opens with a card telling us that it’s been produced by Vince Vaughn and Peter Billingsley (A Christmas Story).

I love Brittany Snow and Justin Long so I’m a shoe in for this, but the trailer paints a picture of the classic holiday ensemble comedy. You know, the one that makes you feel less bad about the insanity that occurs under your roof every year while still making you hopeful for a Christmas miracle of love?

Check out the trailer below and look for Christmas With The Campbells in Theaters and Streaming on AMC+ December 2nd.

The traditional holiday romance movie gets a little more fun this year with a spin from co-writers Vince Vaughn and Dan Lagana. In Christmas With The Campbells, when Jesse gets dumped right before the holidays by her boyfriend Shawn, his parents convince her to still spend Christmas with them, and Shawn’s handsome cousin, while Shawn is away.