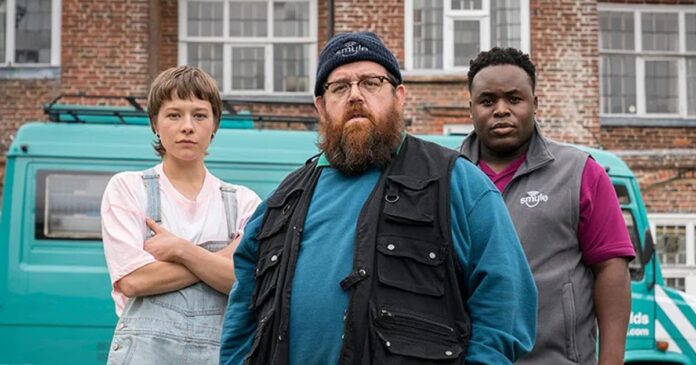 Any time Simon Pegg and Nick Frost get back together it’s a cause to celebrate. Yesterday, the first images of their Amazon horror-comedy series Truth Seekers were revealed, and today saw Pegg, Frost, and co-writers James Serafinowicz and Nat Saunders attend a Comic-Con @ Home panel where they debuted a teaser.

The series follows “a team of part-time paranormal investigators who team up to uncover and film ghost sightings across the UK, sharing their adventures on an online channel for all to see. However, as they stake out haunted churches, underground bunkers and abandoned hospitals with their array of homemade ghost-detecting gizmos, their supernatural experiences grow more frequent, more terrifying and even deadly, as they begin to uncover a conspiracy that could bring about Armageddon for the entire human race.”

Frost leads the way as Gus, who uses his boring job as a broadband installer to cover for his paranormal investigations. Pegg plays a supporting role as Gus’s boss, who may or may not be up to something evil. So don’t expect the traditional teamup from the Cornetto duo, which may disappoint some of their fans.

However, they do say to look for a tone that balances horror and humor much the same way Shaun of the Dead did…

“You have to not make fun of the horror,” Pegg said.  “It’s tempting with genre fair to parody that…but I think the key for horror-comedy is to take the horror seriously.”