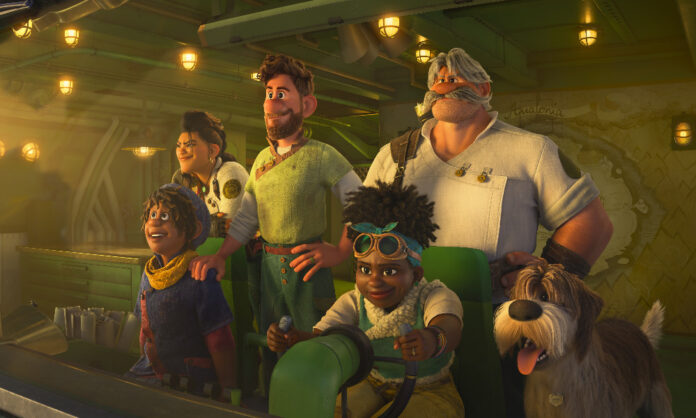 Trust in Don Hall. That’s a mantra I’ve taken to heart when it comes to animated movies, and Disney has learned it, too. The filmmaker behind 2010’s excellent Winnie the Pooh, along with other hits such as Big Hero 6, Moana, and Raya and the Last Dragon is back with another wonderful escape into animated bliss with Strange World. This pulpy family adventure that’s part Fantastic Four, part Journey to the Center of the Earth is also a light-hearted family adventure with incredible animation and a classic storyline that teaches us to respect the choices of those close to us, but also to do something to protect the world we live in for the next generation.

Yes, it’s message heavy and some will balk at the overt stabs at representation, but Disney should be rewarded for such things, right? I truly don’t understand those who criticize because, such as with Strange World, the family at its center features an interracial couple, who have a mixed-race son who happens to be gay. Heaven forbid!

A multigenerational story of men looking to step out of their father’s shadow, it begins in the land of Avalonia where the herculean explorer/hero Jaeger Clade (Dennis Quaid) drags his scrawny teenage son Searcher (Jake Gyllenhaal) on one dangerous quest after another. Jaeger has it in his head to journey past the mysterious mountains where no man has ever been. Whether it’s to find something to help Avalonia, or just to boost his own ego is unclear. It’s probably a bit of both. But just as he’s about to do it, Searcher discovers a glowing green plant that could be the solution to all of Avalonia’s energy problems. Clade doesn’t care, though, and heads into the mountains alone, leaving Searcher and the rest of the group behind.

Twenty-five years later, Clade hasn’t been seen since, Avalonia has been transformed by Searcher’s discovery of the “Pando” plant, and he also has a son of his own, Ethan (Jaboukie Young-White). Along with his pilot wife Meridian (Gabrielle Union), Searcher has built himself quite a life as a farmer of Pando. He’s never wanted to be an explorer like his father. Ethan, on the other hand, wishes to be more like the grandfather he never met, and who Searcher refuses to speak of.

But Searcher is forced to confront his explorer lineage when Pando starts to die out, and with it so will go Avalonia. While he doesn’t want to, Searcher agrees to join a mission led by president Callisto Mal (Lucy Liu), an adventurer herself and friend of Clade’s, to the planet core to find the source of the problem. Of course, Ethan stows away on the ship, his dog Legend in tow, and Meridian finds herself there, as well. Oh, and they happen to run into the long-missing Clade almost immediately!

The land they find themselves in is as strange as the title promises. A vibrant mix of pinks and reds dominates the landscape, as well as the many weird creatures that populate it. Some of them, including pterodactyl-like swarms, are dangerous and attack on sight. But there are others that resemble large plodding dinosaurs, trudging across fields of blue like refugees from Jurassic Park. And this being a Disney property, there’s also the lovable blue goo creature named Splat, who is friendly enough to become a pet to Ethan and an inevitable piece of merchandising.

Any hope for Avalonia depends on these three generations of Clade men learning to accept the choices made by the others, while realizing they have much more in common than they do any perceived differences. Along the way, the Clades will learn some interesting things about the true nature of the place they call home, and honestly, the big reveal is pretty obvious right away and it’s a little surprising all of these geniuses couldn’t figure it out. Strange World does a great job of keeping the stakes high without sacrificing any humor, fun, or the excitement of new discovery. Some of the interactions between Splat and Legend (poor dog can’t work a door!!) are downright hilarious. Searcher’s constant embarrassing behavior around Ethan’s crush is also good for a few laughs and doesn’t overstay its welcome.

Again, trust in Don Hall. The veteran animator creates in with Strange World an exotic, thrilling, old school adventure that could have been ripped out of classic dime novels. It does have the feeling of an opening act, though, like it could’ve been even bigger and more bizarre but was held back for future sequels. If that’s the case, I’m all for it. Why stop at three generations of Clades?

Strange World is in theaters now.