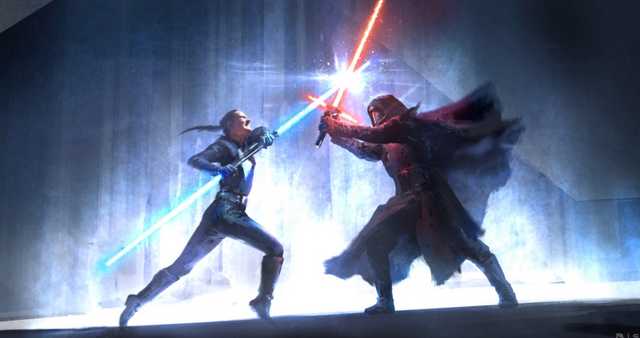 Forget the Snyder Cut. Can we get a #TrevorrowCut of Star Wars: Episode 9, please? In the weeks following the disappointing The Rise of Skywalker, reflected not only in critical reviews but in lackluster box office, we’ve seen leaks of what might’ve been in Colin Trevorrow’s film, titled Duel of the Fates, had remained in place. Count me in among those who feel it would’ve been a far superior movie, with a storyline that embraces and concludes ideas from both Rian Johnson and JJ Abrams.

Well, the leaks are continuing, now with concept art for Trevorrow’s film that highlights some of the key scenes in what was to be a vastly different story than what we got in The Rise of Skywalker. I encourage you to read my breakdown of the Duel of the Fates story to get a better understanding of what these images mean.  We see Rey with her dual-bladed saber, Finn’s rebellious activities on Coruscant, the fall of Chancellor Hux (Yep, he got a new gig!), and Kylo Ren’s battles with the spirits of Vader and Luke Skywalker. Where’s Palpatine?  Dead and buried, just as he should’ve stayed.