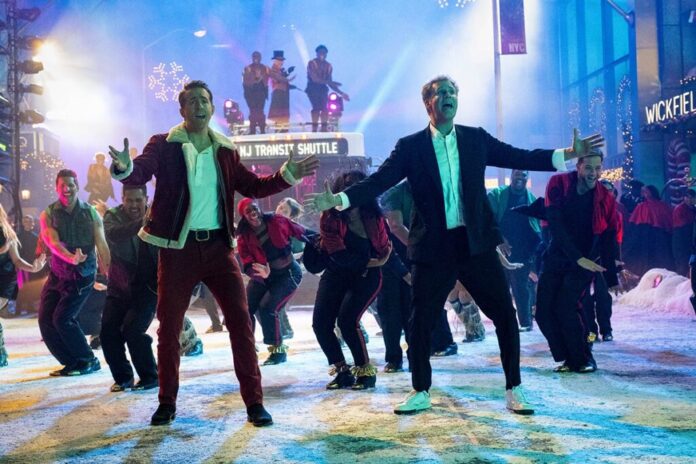 2022 is going to be a huge year for Apple, as they’ve got a slew of big money films vying for your subscription dollars. And they’re getting out ahead of things by dropping first-look images at some of the most anticipated films on their slate, including Spirited, the holiday musical-comedy starring Will Ferrell and Ryan Reynolds.

Opening on August 25th is the animated film Luck, from Skydance Animation. The film features the voices of Jane Fonda, Whoopi Goldberg, Eva Noblezada, Simon Pegg, Flula Borg, Lil Rel Howery, Colin O’Donoghue, John Ratzenberger, and Adelynn Spoon, centering on the unluckiest girl in the world who stumbles on a world of good and bad luck. The film is directed by Peggy Holmes (The Little Mermaid: Ariel’s Beginning), with one of the producers someone you might have heard of, scandalized ex-Pixar veteran and Toy Story director John Lasseter.

Ewan McGregor and Ethan Hawke are brothers attending their hated father’s funeral in Raymond and Ray. The film is a reunion between McGregor and his Last Days in the Desert director, Rodrigo Garcia. No release date has been set for that one.

Zac Efron and his mustache go on The Greatest Beer Run Ever for director Peter Farrelly, his followup to Best Picture winner Green Book. Also starring Russell Crowe and Bill Murray, the film is based on the true story of John “Chickie” Donohue, who in 1967 snuck into Vietnam to share a beer with his childhood friends on the battlefield.

And then there’s the anticipated holiday treat Spirited, starring Ryan Reynolds, Will Ferrell, and Octavia Spencer in a modern musical adaptation of Charles Dickens’ A Christmas Carol. The film is directed by Instant Family and Daddy’s Home duo of Sean Anders and John Morris. Can Reynolds have he same success at Apple that he’s had at Netflix?

‘Spirited’ Trailer: Ryan Reynolds And Will Ferrell Team On A Jolly Holiday Musical For Apple TV+