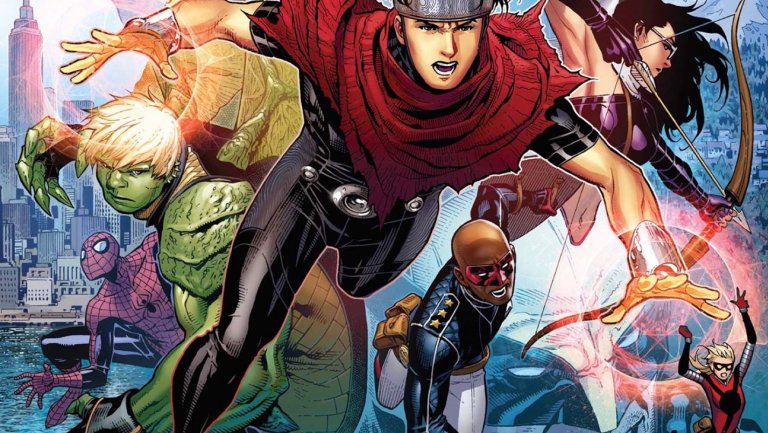 It’s clear that the MCU is undergoing an evolution. A new crop of heroes were introduced to be part of Phase 4, but it’s going to take more than that to replace the Avengers. So how about the Young Avengers? Fans, including myself, have theorized for a while the young team of heroes would be debuting soon, and now a rumor says their arrival is actually in the works.

Feel free to be skeptical of this rumor from Full Circle, a site I don’t know shit about, but they claim an insider has info on a Young Avengers series happening on Disney+, with the possibility of a movie to follow. They add that another young team of Marvel heroes, the Champions, could be included which could mean Ms. Marvel  may have a role in all of this. We already know Ms. Marvel will be getting her own series and a movie in the near future.

The casting of Hailee Steinfeld as Kate Bishop in the upcoming Hawkeye series could be the start of the Young Avengers’ formation. Bishop will be gaining experience from Clint Barton, but who knows where she goes from there? Other members of the Young Avengers team have connections to Disney+ Marvel shows. Eli Bradley aka Patriot is the grandson of Isaiah Bradley, an African-American who was among the first to survive the Super-Soldier serum later given to Captain America. He could possibly be introduced in Falcon & the Winter Soldier. William Kaplan aka Wiccan and Tommy Shepherd aka Speed are the children of Scarlet Witch and Vision, maybe debuting in WandaVision? ; And Kid Loki is a reincarnation of…well, Loki, who has his own timeline-jumping series coming up.

If true, don’t be surprised if others join the team, maybe even Ant-Man’s young daughter Cassie Lang, who eventually becomes the Young Avenger known as Stature.

It all makes sense but until someone from Marvel, preferably Kevin Feige, says it’s real just keep it filed away for now.