I think it’s safe to say we’ve never seen John Travolta play a character like he does in The Fanatic. Travolta takes on the role of Moose, a socially-awkward horror movie fan in Los Angeles, who has a series of encounters with his idol, Hunter Dunbar (Devon Sawa), that go terribly wrong. It’s a timely film directed and co-written by Limp Bizkit frontman Fred Durst, putting Travolta squarely on the other side of celebrity fandom. 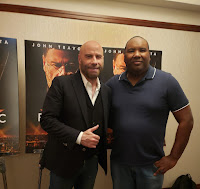 Travolta may be a screen legend, but he’s not the most public figure at this point in his career. Whether The Fanatic points to a reason as to why, we only begin to brush against in our conversation about the film. Travolta also talks about his approach to playing Moose, capturing his mannerisms and actions, as well as his own self-image after a lifetime in front of cameras. He also gets into working with Nicolas Cage on Face/Off and how his approach on that cult classic still has an impact on him now.

The Fanatic opens in theaters on August 30th.

‘Ted Lasso’ Interview: The Pre-Production Team Breaks Down How They Tackled Designing And Casting The Hit Show