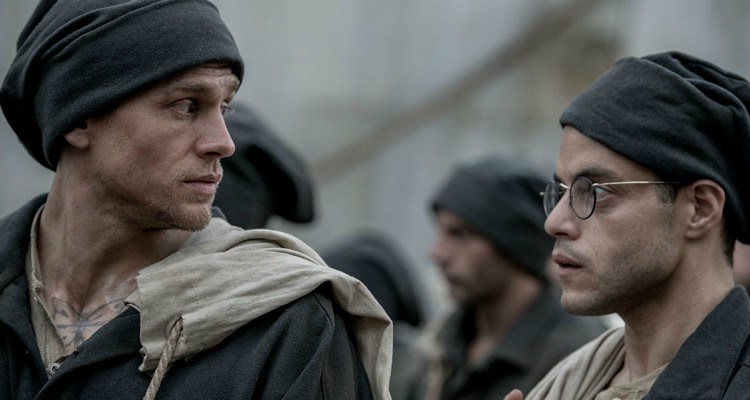 The most memorable films featuring the legendary Steve McQueen were so driven by his relentless cool and charisma that Hollywood has found it tough to remake any of them competently. It’s a problem that would prove especially difficult for classic 1973 film Papillon, a star-driven prison break drama that saw McQueen paired up with a reserved and highly-mannered Dustin Hoffman. Fortunately, Michael Noer’s remake takes a more character-driven approach, a tactic that works well in favor of its stars Charlie Hunnam and Rami Malek.

Hunnam, who along with The Lost City of Z is having a Hell of a year, plays the real-life Henri Charrière, a safe cracker and thief whose best-selling novel inspired a pair of screen adaptations. Henri had the swagger to match the gangsters he often worked for in 1930s France, in one scene brazenly telling his boss that he skimmed some of their recent take for himself. But it’s that confidence/arrogance that also has him romancing a beautiful cabaret dancer (The Knick‘s Eve Hewson), with promises of an exciting life of adventure for the two of them. Well, his life definitely won’t be dull, it just won’t be with her. He’s suddenly framed for murder, railroaded through the system, and sent to Devil’s Island penal colony in French Guyana, a place so bad it’s tantamount to a death sentence just being there. 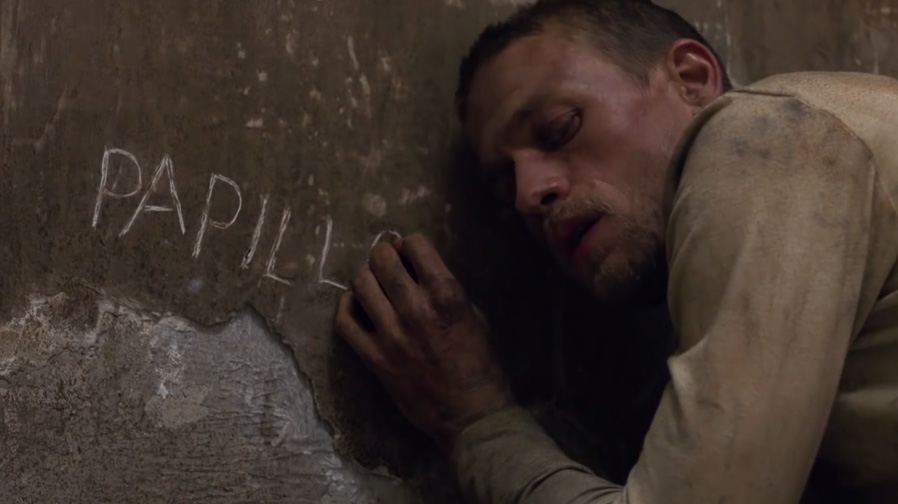 You think HBO’s Oz was tough? It’s got nothing on this island wasteland, where it’s kill or be killed all of the time. And you don’t have prisoners to worry about so much as the guards, who have a warden openly telling the inmates they have authority to kill them if they try to escape. Not that there’s anyplace to go, unless starving to death in a jungle Hellhole is the ultimate goal. Henri doesn’t care; he plans on getting out of there as soon as possible. After sizing the place up, he becomes friends with white collar criminal and soft target Louis Dega (Malek), who agrees to bankroll Henri’s escape plan with money he’s hidden in his rectum. It doesn’t prove to be easy, or a very quick process.

Papillon is an intentionally grueling experience, to get an idea of the unbearably harsh conditions Henry and Louis must endure each day. As they engage in back-breaking work, emotional torments, and the constant threat of violence, you see the glimmer of hopefulness slowly replaced by a feral need to survive. Hunnam is a wilder physical presence than McQueen, and he handles the ruggedness of the role quite well. But it’s as the toll begins to weigh on Henri and we see him reduced to skin and bones that Hunnam shows how far he’s come as an actor.  The same goes for Malek, whose performance as Louis is, at least in my opinion, more nuanced and less caricature than Hoffman’s was. He perhaps has the farthest to fall emotionally. He goes in thinking his family and wife will spring him relatively quickly, and when he realizes that isn’t going to happen it’s heartbreaking. 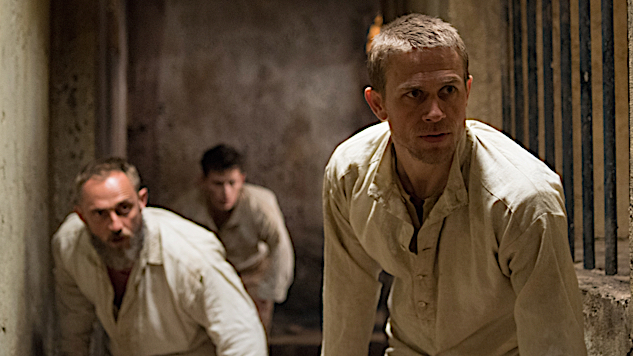 Less slick and stylish than the original, Noer’s version is dirty and gritty, but also pretty slow and unattractive to look at. The passage of time goes by in fragments but they aren’t always cohesive, which makes sense given how the days must all start to resemble one another after a while. But you also wish there was more thrill to the escape attempts. Henri and Louis take multiple stabs at freedom and they never give you the rush of adrenaline that they should. Fortunately, what is lacking in pure excitement is made up for with strong performances in two very demanding roles. It doesn’t quite live up to the McQueen classic, not that anybody would’ve expected it to, but Papillon does certain things well that its predecessor didn’t, like show us more of Henri’s life before imprisonment, to give us a sense of what he’s lost. In short, don’t sleep on this just because it’s another remake. You will find there’s a lot to like about this version of Papillon, and that it does enough differently to stand on its own.