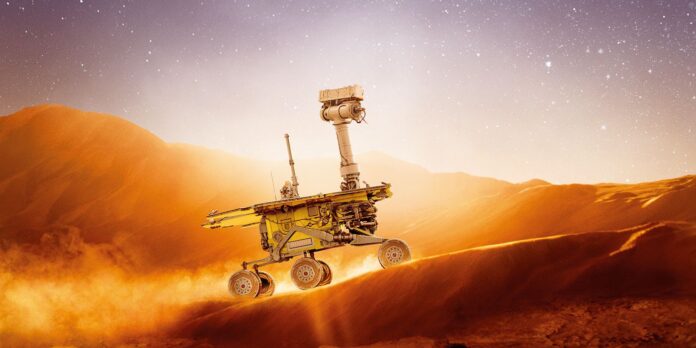 America’s (and humanity’s) interest in and commitment to exploring beyond our planet through the space program has always been thrilling and inspiring, even though it has recently come to be taken for granted. After all, our country has successfully placed a human on the moon, and our space program has continuously been one of the few things that bring us together. Recently, it appears as though other concerns have absorbed our attention, space is still cool, and in his most recent documentary Good Night Oppy, filmmaker Ryan White aims to remind us about the Mars Exploration Rover (MER) Program and its success.

The MER program is seen in Good Night Oppy from its inception in 2003 up through the launch of the two rovers “Spirit” and “Opportunity” (“Oppy” for short) and their exploration of the vast red planet. To determine whether or not the planet formerly had water, which would alter how humans see space, the two robots were dispatched to Mars. After all, if a planet is capable of supporting water, then it should theoretically be able to support life. Additionally, if there was previously life on Mars, it would help answer the question of if we are alone in the universe and rekindle interest in grand ideas of exploration.

Good Night Oppy uses archive material, interviews with scientists and engineers, and some spectacular CGI by Industrial Light & Magic to tell the tale of the two rovers and the arduous labor that NASA put into making the mission a reality. The film explores the early strategy sessions for the rovers, the numerous testing required to ensure their survival upon landing on Mars, and every imaginable backup plan that could have been thought of.

Thanks to the conversations with the scientists and engineers, Good Night Oppy excels at giving us an “on the ground” perspective. We get to experience the fervor and passion these committed scientists and engineers had for a project that they believed in, as well as learn a little bit about how NASA operates (such as how every morning to start the day, a song is played in mission control to liven everyone up). Some were motivated to enlist because of Star Trek, while others were motivated by seeing past NASA missions on television. However, each and every one of them was devoted to their task and anxious to get started. Just as we got to see them at their best, we also see them when the chips are down and everything seems as though they failed. Good Night Oppy does a fantastic job of illustrating how difficult working at NASA is. There were always hurdles, and you had to be the best of the best or the best at everything you did every day.

Of course, the rover Opportunity is the subject of Good Night Oppy. Around the same time that Opportunity and Spirit were launched, they both made successful landings on Mars. The expedition was supposed to last 90 “Sols,” or 92.5 Earth days, but it actually lasted for more than 15 years. The stunning CGI scenes of the rovers are so lifelike that Opportunity, or “Oppy,” as she’s called, nearly seems to have a personality of her own. It nearly sounds as though the engineers and scientists are talking about their own child when they discuss Oppy. There is an emotional investment felt through the interviews when the rovers are in peril. Speaking about CGI, ILM does a fantastic job at simulating the appearance of the Martian rover scenes. You might occasionally doubt whether or not that is Mars or CGI.

If you don’t remember how the mission ends, Good Nigh Oppy does a great job giving you a full history lesson about Opportunity, who lasted longer than Spirit, and the discoveries she found before finally shutting down. She gained widespread notoriety and renewed public enthusiasm for space travel. The film honors Oppy and the other scientists and engineers who gave their all to the project, hoping to change the course of the planet in the process. The film’s narrator, Angela Basset, contributed to establishing the mood and feelings of the narrative. The combination of compelling interviews and breathtaking graphics makes Good Night Oppy a wonderful movie.

Good Night Oppy is currently playing in select theaters and will premiere on Prime Video on November 23rd.