Home Reviews Khalil Review: ‘Something In The Dirt’Moorhead And Benson Give Us A Great Look...
Facebook
Twitter 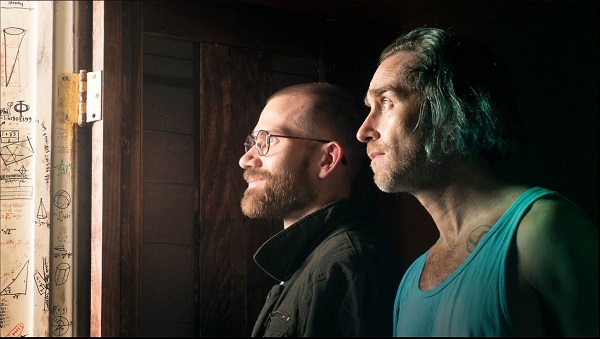 Aaron Moorhead and Justin Benson have had distinctive film careers. The pair cultivated their indie cred over the years by getting their start in a variety of horror and sci-fi movies (Resolution, The Endless, Synchronic). It appears that their trajectory was moving towards greater budgets and more mainstream when they were recently snatched up by the Marvel machine, directing a few episodes of Moon Knight and will be working on season 2 of Loki as well as Netflix’s horror anthology Archive 81. The directing team, however, is returning to their independent roots with Something in the Dirt, their latest film by XYZ Films. Conceived in lockdown during the pandemic, the duo opted to tell a story of the supernatural, and two people’s endless quest to document the phenomenon in a chance to enrich themselves.

Levi (Benson) and John (Moorhead) are two neighbors that don’t seem to have much in common. Benson works at a bar while hiding an embarrassing secret and John (Moorhead) has just gotten out of a relationship. The two happen to meet each other outside their homes having a cigarette and instantly hit it off and become cool with each other. As they make small talk and get used to being neighbors, the craziest thing happens, the ashtray in the apartment starts spontaneously levitating. While this would freak most people out, they start thinking about how they can monetize this situation.

This story has a startling resemblance to the UFO-centered narrative of Jordan Peele’s summer blockbuster Nope. While Nope had an unlimited CGI budget and a star-studded cast, Benson and Moorhead chose to make Something in the Dirt with a smaller crew (because of the pandemic) and guerilla-style filmmaking and spend most of the film in Benson’s personal apartment to cut down shooting costs. Of course, this is due to financial constraints, but the upshot is that it gives the movie a more personal feel.

Because Levi and John are the main protagonists of Something in the Dirt, there is intimacy between them because, before they learned about this occurrence, they were strangers. The two slowly but definitely get to know one another and discover how distinctly strange they are. They discover that each other is listed on sex offender databases and odd triangle-based cults. Disagreements on filmmaking techniques to capture the footage arises, as well as disagreements with each other’s personal life choices.

A huge curveball is thrown at the audience as Something in the Dirt goes along, making you doubt everything you’ve seen up to that point. Everything is thrown for a loop in a clever twist a la M. Night Shyamalan. We get to see how everything plays out as the movie transitions into a documentary/mockumentary in the wake of the story’s events, leading to a unique conclusion. As a result, the viewer is unsure as to whether what they have just seen is the real tale or whether an unreliable narrator is telling them what happened. You are left speculating about reality even after you believe you understand what is true and what isn’t.

Something in the Dirt’s low resources and setting can be discouraging because some of the themes and issues it explores call for a more substantial picture. Although hearing about Levi and John’s background through their talks is interesting, a brief flashback highlighting the incidents would have been helpful. The presentation, which resembles a stage play in certain ways, nevertheless benefits the film. Even if it doesn’t provide answers to the issues it raises, it is absolutely captivating right up until the film’s final moment.

Something in the Dirt is currently playing in select theaters.

Something in the Dirt
1 of 7