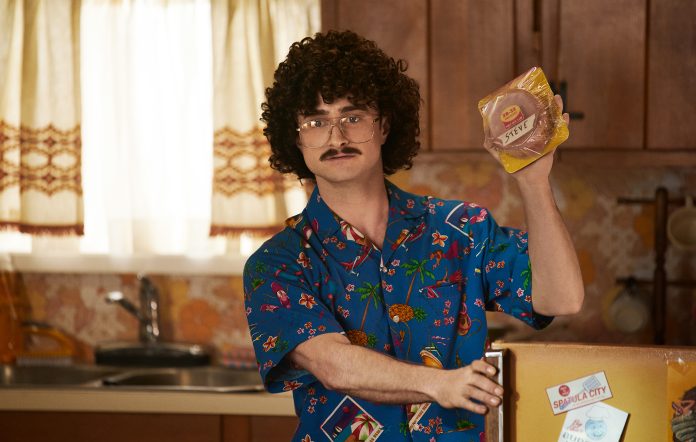 What’s cool about “Weird” Al Yankovic is that he exists as a sort of walking parody. His mega-success in the ’80s and ’90s saw him emerge as an accordion-playing nerd who made polka-inspired riffs on actual rock and pop hits. He didn’t have the kind of rise ‘n fall career that fuels so many music biopics, so in a way it makes sense that a movie on his life, Weird: The Al Yankovic Story, be a complete parody of the genre. And while it’s definitely a ridiculous look at the industry in the vein of Walk Hard: The Dewey Cox Story and the more recent Popstar: Never Stop Never Stopping, those films are complete works of fiction, and sometimes you wish to see a tiny bit of substance to Yankovic’s story.

Because there’s nothing that actually informs the unlikely rise of “Weird” Al Yankovic, or his ability to parody anybody and anything he wanted without repercussion. Nor any semblance of insight as to why we, and that includes myself, were so receptive to it. That would’ve been nice to see in addition to all of the UHF-level humor.

Directed and co-written by comedy vet Eric Appel, with Yankovic also on the script, Weird is best when lampooning rock biopics. With films such as Bohemian Rhapsody, Elvis, and others continuing to trot out a well-worn formula, it’s clear they are ripe for skewering. The young Al Yankovic grows up in California under the care of his quietly reassuring mother (Julianne Nicholson) and a strict, factory-working father (Toby Huss) who hopes for the same for his son. Never mind that nobody knows what the factory actually makes and that workers keep dying there.

It’s Al’s mother who gets him his first accordion, feeling guilty when the salesman (Thomas Lennon) gets a massive beatdown for trying to sell the thing. Of course, Al’s father is against his dreams of becoming a musician who makes cute little songs that replace the original words, and it’s this discouragement that fuels his ambition to be great. Later, Al, now played by a go-for-broke Daniel Radcliffe, uses lunchtime with his buddies to stumble into his first, literal overnight hit “My Bologna”. Everything in this film happens at a rapid clip. Within hours, he’s attending an all-star shindig with cameos galore as famous ’80s celebs: Jack Black as Wolfman Jack, Conan O’Brien as Andy Warhol, Paul F. Thompkins as Gallagher, Akiva Schaffer as Alice Cooper, Jorma Taccone as Pee-Wee Herman, and Rainn Wilson as Doctor Demento, a carny-like mentor to Al.

What’s fun about Weird: The Al Yankovic Story is that it creates this complete alternate reality where Al’s chosen form of entertainment is subversive, dangerous, and ultra-popular on its own. Early on we see him be squirreled away to a secret polka party full of edgy teens doing the chicken dance. Later, Al’s hit “original” song “Eat It” becomes an inspiration for Michael Jackson’s “Beat It”, and Al is forced to confront what it feels like when the situations are reversed. He also enters a toxic Yoko Ono-like relationship with Madonna (Evan Rachel Wood), who has her own agenda. While Wood’s performance shakes things up just as the constant parodies are growing stale, it isn’t enough to shake the film from a downward turn in momentum. By the time Al is involved in a dangerous kidnapping plot with devoted fan and infamous drug lord Pablo Escobar (Arturo Castro), the wheels have totally come off this party van.

But that is pretty deep into the film, and Weird: The Al Yankovic Story always feels true in a way to the man himself. When there wasn’t space for his chosen form of music out there, “Weird” Al Yankovic created one and never looked back. What more should we have expected from a film on his career than one that reflects how surreal that journey has been?

Weird: The Al Yankovic Story is streaming now on Roku.