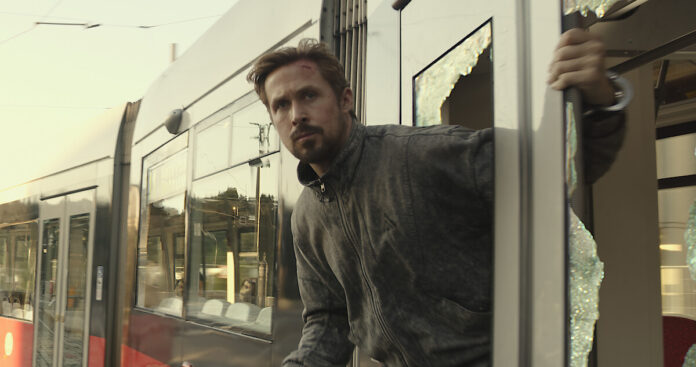 The shame in Netflix’s massively-budgeted blockbuster star vehicle, The Gray Man, is that it won’t matter how good, or not good, it is. Despite stars the caliber of Ryan Gosling, Chris Evans, Ana de Armas, and Billy Bob Thornton, it’s destined to only inspire endless thinkpieces about Netflix’s strategy of choosing movies seemingly concocted in a lab to get the 7 or so minutes to qualify as a “viewing”. Red Notice was just such a film. The Gray Man is better than that, but only marginally so, as it’s pretty much a generic assassin thriller right down to the bone.

That’s not to say The Gray Man is bad. It’s actually quite a lot of fun, but your mileage will vary depending on how much you enjoy watching Gosling and Evans, both with douchey facial hair, slug it out and trade risible banter. Plus, the film is directed by Marvel’s Avengers duo of Joe & Anthony Russo, joined by their MCU screenwriter pals Stephen McFeely and Christopher Markus, so you know there’s a ton of action and a vaguely superhero-esque vibe. In fact, this is probably the closest Gosling has come to playing a superhero, except for maybe in Drive?

There’s actually quite a lot of similarity between Gosling’s assassin Court Gentry and his Drive “hero”. Both are quiet men with a certain code of honor that only they can understand. The major difference is that Court is more likely to crack a joke than crack a skull. He’s still an expert killer and defender of the weak, which is what makes him ace for a clandestine operation within the CIA. There’s no messing around with this basic plot; early on we see Court aka Sierra Six on a mission to kill a dangerous target. The mission goes sideways when the target turns out to be one of Court’s predecessors, unveiling a dark legacy of secrets within the agency. Court instantly becomes a target of CIA head Denny Carmichael (Bridgerton‘s Regé-Jean Page), who despite the warnings of worrywart colleague Suzanne Brewer (Jessica Henwick with a terrible Hillary Clinton ‘do), enlists psychopathic mercenary Lloyd Hansen (Evans) to hunt him down.

The Gray Man unfolds like a Luc Besson assassins movie from the ’90s, which readers of this site will remember as among my very favorite things. But that’s the problem. I expect this movie from someone like Besson, not from the Russos. I expect a lot more from them or at least something different. Short of some cool set pieces in gorgeous international locales, there’s little here that you haven’t seen before elsewhere. That said, the production values are impeccable. It’s a gorgeous movie, and not just the cast in front of the camera. It occasionally grasps the classy feel of a James Bond picture, while other times it resembles the slickness of John Wick. You could do worse than being in the ballpark of either.  Some of the editing is inexplicably haphazard, though. A parachute sequence involving Court is a mess, and sometimes it’s tough to tell what the Hell is going on and who is doing what. The action is solid, but lacks the punch of the Russos’ explosive MCU debut in Captain America: The Winter Soldier or its followup in Civil War.

The main event is Gosling vs. Evans, and they put on quite a show. Yes, their verbal exchanges boast some pretty awful, basic tough-guy language but the fun is in the details. Evans’ Lloyd Hansen is such an insecure little prick that he gets angrier at Court’s impeccable reputation and seeming invincibility. Gosling and Evans play opposite one another beautifully, and I have a feeling this won’t be the last time we get to see it. Evans in particular is having a ball acting against type. Even before his exit from the MCU, Evans has been branching out to play characters as opposed to his squeaky clean image as possible. Lloyd definitely fits the bill and he’s the most enjoyable one to watch by far.

Unfortunately, the same can’t be said for Ana de Armas, who doesn’t make an impression as Court’s mercenary tag-a-long, Dani Miranda. Certainly, she fails to make the splash that she made in No Time to Die, and that was with a fraction of screen time. Thorton, as Court’s recruiter and wisened old mentor Donald Fitzroy, quietly steals scenes as does Alfre Woodard as former CIA chief Margaret Cahill. Along with talented Once Upon a Time in Hollywood actress Julia Butters as Fitzroy’s niece, they give us the only characters we can really feel anything for. They exist primarily to give us a reason to root for Court, who never escapes the fact that he’s a hired killer for the government.

The Gray Man offers up some decent action and popular fan-favorite actors trading barbs and bullets. At a reported $200M cost, one might think it should have something to say, as well. But that’s not what Netflix was paying for. In terms of delivering an entertaining blockbuster replica that will get subscribers to hit “Play”, The Gray Man gets the job done.

Netflix will debut The Gray Man on July 15th.