Home TV Amazon Prime Galadriel Can Sense A Growing Evil In New ‘The Lord Of The...
Facebook
Twitter 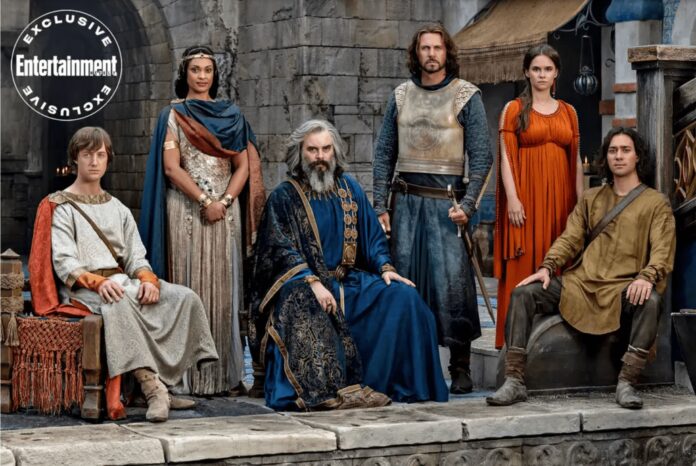 Perhaps Amazon is holding out until San Diego Comic-Con to drop a full trailer, but they’re certainly giving us plenty of teasers for their Lord of the Rings: The Rings of Power series. And now there’s another, this one offering a new look at characters from the island kingdom of Númenor.

The  2 1/2-minute teaser is a good companion to new images released by EW featuring Cynthia Addai-Robinson as Queen Regent Miriel, Maxim Baldry as Isildur, Lloyd Owen as Elendil, and Trystan Gravelle as Pharazon.  We also see Robert Aramayo as a young Elrond, and Morfydd Clark as Galadriel, who can sense the impending arrival of Sauron’s great evil. The series takes place during the time author JRR Tolkien called The Second Age, thousands of years ahead of his Lord of the Rings and The Hobbit stories.

“We were not interested in doing a show about the younger version of the same world you knew, where it’s a little bit of a prequel,” McKay explains. “We wanted to go way, way, way back and find a story that could exist on its own two feet. This was one that we felt hadn’t been told on the level and the scale and with the depth that we felt it deserved.”

The Lord of the Rings: The Rings of Power hits Prime Video on September 2nd with new episodes dropping weekly.

Prime Video’s The Lord of the Rings: The Rings of Power brings to screens for the very first time the heroic legends of the fabled Second Age of Middle-earth’s history. This epic drama is set thousands of years before the events of J.R.R. Tolkien’s The Hobbit and The Lord of the Rings books, and will take viewers back to an era in which great powers were forged, kingdoms rose to glory and fell to ruin, unlikely heroes were tested, hope hung by the finest of threads, and one of the greatest villains that ever flowed from Tolkien’s pen threatened to cover all the world in darkness. Beginning in a time of relative peace, the series follows an ensemble cast of characters, both familiar and new, as they confront the long-feared reemergence of evil to Middle-earth. From the darkest depths of the Misty Mountains, to the majestic forests of the elf capital of Lindon, to the breathtaking island kingdom of Númenor, to the farthest reaches of the map, these kingdoms and characters will carve out legacies that live on long after they are gone.

‘The Lord Of The Rings: The Rings Of Power’ Teaser Sees Evil Light Up The Skies