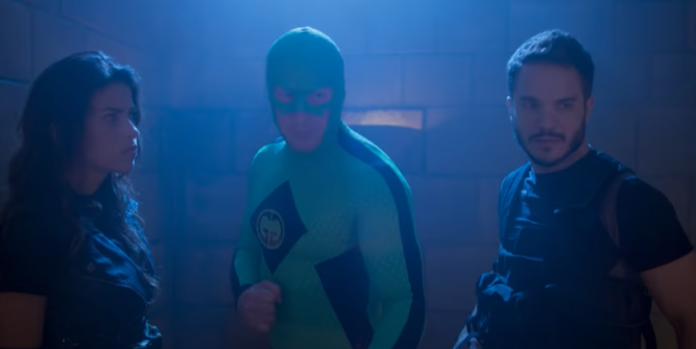 Have you ever wondered what would happen if a white, middle-aged car salesman got wrapped up in his adoptive Mexican-American family’s quest to stop an ancient evil from taking over the world? Yes? Well boy do I have news for you! Green Ghost and the Masters of the Stone is here, and is exactly that! 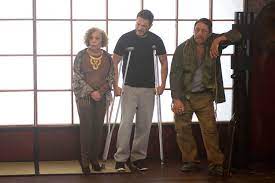 Charlie Clark, the writer and star of Green Ghost and the Masters of the Stone, took a (mostly) auto-biographical approach to this latest feature in all but the most fanciful aspects. The film sees the aptly named Charlie Clark, a auto dealer (and underground luchador) plunge from his mundane everyday existence into a world of Mayan Gods and ancient evils when his adoptive Abuela, Nana, reveals that he has the magical power to fight an ancient evil called Drake and his minions. 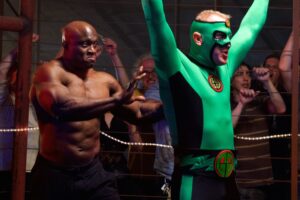 We’ll talk about the film itself in a bit, but the coolest aspect of this film wasn’t revealed until I started doing some background on Clark himself. As it turns out Charlie Clark (the real one) was a Nissan dealer in Harlingen Texas and was looked after by his nanny Mari Cruz Aurora Aguirre (Nana) while his father was away on business. Clark and Aguirre became so close she eventually considered him family and was treated as such, becoming exposed to the gamut of beautiful Mexican traditions. Knowing this after the fact, you can really see that this film likely started as a daydream in the mind of Clark as a child, imagining his Nana giving him awesome powers and a world saving purpose. 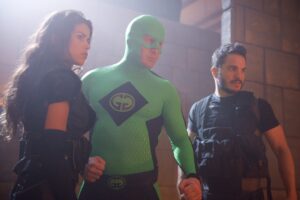 So the backstory is an A+, but what of the movie? Well, if you are a fan of genre action films of the 70s, 80s, and 90s you will most definitely find something to love about Green Ghost and the Masters of the Stone it’s a genre mash-up in the truest sense bringing together so many tropes (in the best way) from the last 45 years of action and adventure genre films. It’s got a real Robert Rodriguez/Troublemaker studios feel but in a way that doesn’t feel like a rip-off, it’s in that vein, but doesn’t feel like it’s trying to be in that vein. While some of the FX are a little shoddy, and the script could use some focus here and there as a whole it accomplishes what it intends to, giving the viewer an entertaining experience. 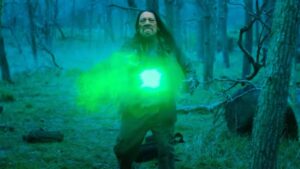 Aside from the Southwest film influences it’s obvious that Clark was a fan of the kung-fu films of the 70s and 80s. This becomes apparent as soon as Charlie meets El Trío de la Luz (The Three of the Light), a trio of badass warriors who train Clark to become the warrior he needs to be. It goes without saying that the highlight of these sequences is the inclusion of cult-icon Danny Trejo as drunken sensi Master Gin (get it….like Gin and Tonic), cheesy name aside Trejo is so much fun even taking time to get in a winking Machete joke.

The film is light and fun, everything a good action adventure film should be and falls right in line with the types of films where it pulled it’s inspiration. While the film is all of these things all while touching on themes like family being more then blood and cross cultural appreciation, I hope it also lights a spark for something more. That something being a spotlight on the need for more Native American, Incan, and Mayan mythology in film and TV. Story ideas have been pulled from everywhere else it seems but there’s this unending wealth of insanely creative and interesting characters and stories right here on the continent, hopefully there’s some big-budget producer out there who sees Green Ghost and the Masters of the Stone and realizes the potential in stories like these. Lastly, if you’re still on the fence, come on…the guy dedicated this film to his Nana is that NOT something you want to support?