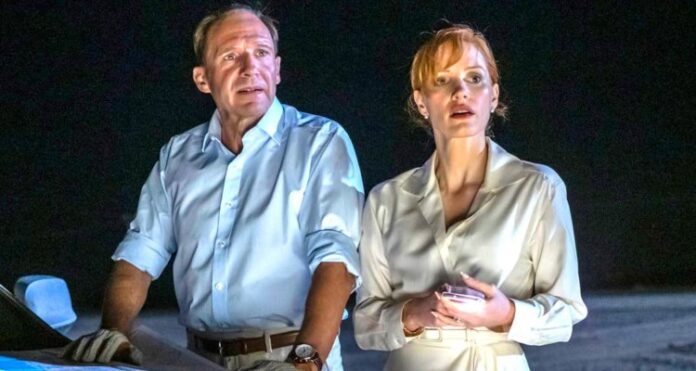 There’s so much potential for a scathing, brutal takedown of the wealthy from John Michael McDonagh’s The Forgiven that I find it personally offensive how dull it actually turns out to be. This is a film led by two classic movie stars, Jessica Chastain and Ralph Fiennes, two actors who can make a meal out of almost any role. It features an absolute wealth of co-starring talent, including Matt Smith, Caleb Landry Jones, Christopher Abbott, Abbey Lee, and Said Taghmaoui. Virtually everyone in front of the camera is playing someone horrible, always a fun set-up that appeals to me greatly. But McDonagh, who has navigated darkly comic journeys of redemption in films such as the tremendous Calvary and The Guard, fails to convince either in exploring the wealthy’s hedonistic tastes or in their capacity to change.

It starts off positively enough. From jump street, wealthy and clearly unhappy married couple Jo (Chastain) and her doctor husband David (Fiennes) are picking at one another. While traveling through North Africa, he refers to her as “shrill”, one of those words that seems exclusively targeted at women. Is it ever used in any other context? She calls him a “high-functioning alcoholic”, a claim he doesn’t actually dispute but seems to take some pride in. He’s probably not the best person to be driving then, right? Especially through unfamiliar terrain at night? But this privileged pair don’t care, at least until they accidentally run over a kid and kill him. Oops.

So what do the Haves do when they have literally run a Have-Not? Well, you keep on keepin’ on. Jo and David make their way through the High Mountains to their friend Richard’s (Smith) swanky hotel, a former village that has become this sanctuary for the filthy rich. Alongside his terrible boyfriend David (Jones), Richard is hosting an opulent weekend party/orgy full of other awful people. The Hennigers arrive with the dead boy’s corpse in the trunk. But Heaven forbid the killing of this poor fossil-selling boy interrupt the festivities! They seem almost annoyed that it might. Putting their Western entitlement on full display, these gaggle of rich jackasses basically decide that everything is cool, the boy’s death will be ruled accidental, and let’s just move on.

And for the most part they do. McDonagh, adapting the novel by Lawrence Osborne, lets these Western interlopers cut cruelly on the Moroccan people who are just trying to get by. Even with a boy’s dead body in the other room the gaggle of partygoers keep having a good time. Abbott plays Tom, a flirty New York financial analyst who happily refers to himself as “useless”. There’s also Lee as Australian party monster Cody, who never seems to be in a right state of mind. She just sort of flits from one psychedelic moment to the next, from one man to the next, from one compromising situation to the next. There’s also a journalist played by Marie-Josee Croze snapping photos and documenting this very-American debauchery.

Together, they resemble characters from a poor man’s The Great Gatsby. There isn’t even the slightest bit of depth to any of this. Granted, these people are meant to be shallow but McDonagh is going for insight and he wants us to loathe these rich swine for their dismissive attitudes and excesses. But there isn’t enough about them to stir up any actual animus.

Things get more interesting when David is convinced by the dead boy’s father (Ismael Kanater) to return to his village and help with the burial. We learn the child’s name is Driss, and along the way on this journey David begins to learn more about the people and customs he has thought so little of. McDonagh then splits his attention, drawing a contrast between David’s predicament, which is both life-changing for him but also potentially deadly, and the sexual escapades of his wife while he’s not around.

Little of it satisfies, however. The split narrative does nothing to enhance two already-weak subplots, and the debauchery that should be provocative is shot in a dull fashion. Fiennes is an amazing actor but not even he can sell David’s transformation and eventual acceptance of his wrongdoing. There’s simply not enough meat on the bone. Chastain looks great in a closetful of designer outfits, but we’ve seen her play wealthy, glamorous, conceited women before and Jo is the least developed of them all. If there’s one performance that turns heads it’s by Kanater as Driss’ father, whose quiet stoicism slowly gives way to a simmering rage that he can barely hide.

The Forgiven, because of its exotic, isolated locale and high-class characters, does give off an Agatha Christie vibe. But those looking for a twisted mystery will instead find a snoozer reclamation project, as skin-deep as the subjects it wants us to resent.

The Forgiven is open in theaters now.