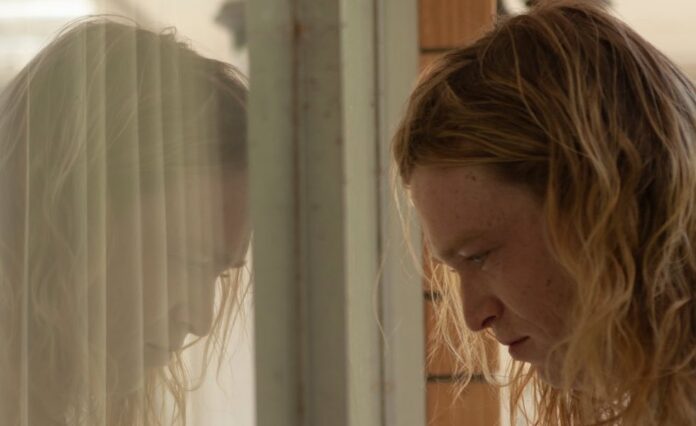 Nitram is one of those rare movies where knowing as much as possible actually enhances the experience. Although, considering the film deals with Australia’s worst perpetrator of gun violence in their history, forcing a complete overhaul of their gun laws, any enhancement means sinking further into one of the saddest, deeply unsettling films to also be utterly compelling. Without a shred of glorification, director Justin Kurzel and star Caleb Landry Jones depict the terrifying forces that molded a disturbed man into a mass murderer.

The question I had going in was, “Why do I need to see another movie about the makings of a killer”? It’s been done, and with our gun happy, lionize the villains culture, it’s been done quite a lot. Jones’ portrayal of the title character, referred to only as Nitram, a fictional nickname that Kurzel and screenwriter Shaun Grant use to avoid publicizing his real name (many mass murderer’s kill for glory and fame), chilled me to the bone. It’s not something I’ll soon forget or want to experience again. Unsurprising; since Jones has repeatedly made creepy performances seem all too easy since his breakout role in Antiviral more than a decade ago.

As many of the major events are well-known, and the conclusion sadly already written in stone, Nitram is shot with a cold detachment. From the beginning, when we see Nitram annoying the neighbors with early morning fireworks, we know he’s already a lost cause. His mother (the great Judy Davis) has the look of someone who has long since given up hope on her son. His father, (Anthony LaPaglia), is very close to the boy but he’s also weak-willed, easy to manipulate, and certainly not made to handle someone like Nitram who can be volatile, to say the least. One gets the impression that his father has spent his entire life being pushed around, and now there’s nothing of the man left.

Nitram is also bullied, adding to his toxic antisocial behavior. And yet, he has this unquenchable need to be liked. But when he tries to make friends, like with the local surfers, it always goes badly. This violent need to be accepted is temporarily cured when he befriends eccentric heiress Helen (Essie Davis), who with her multiple cats and dogs is even more of a town weirdo than Nitram. Their friendship defies description. But it doesn’t change him. The simmering anger and recklessness is still there. It bursts forth when he repeatedly grabs the wheel while they’re driving; and Helen can sense it when he asks her to buy him some real guns and not the air rifle he’s been carrying. A shiver coursed down my spine when he first proposes the question. Later, when Helen is gone and Nitram strides into a gun shop with a duffle bag full of money and easily buys every assault rifle he can find, despite not having any of the documentation, the unease it caused was inescapable.

With the exception of Kurzel’s disastrous big-studio adaptation of the Assassins Creed video game, the filmmaker has been disturbingly good at sinking us into the murky depths caused by unimaginable violence. His debut film, Snowtown, centered on another Aussie mass murderer, while his starry take on Macbeth was one of the darkest ever put to screen. Nitram is like the polar opposite of his post-modern take on the Kelly Gang, which centered on a criminal who many still see as a hero. What’s so disturbing about Nitram is that Kurzel and Grant don’t seem to have any answers as to how someone becomes a killer on such an epic scale. There are clues about what may have inspired him; tragedy, loneliness, a conveniently-timed television broadcast about another spree killer; but how does someone like Nitram come to exist in the first place?

Kurzel’s ability to depict violence in such a way it sears into your memory is thankfully left aside this time. The film thankfully pulls away before the shootings can begin. It’s a small mercy, but a welcome one. Jones’ chilling performance is still there, haunting to the point that it’s doubtful I’ll ever need to watch Nitram again.

Nitram is available now in theaters, VOD, and AMC+.