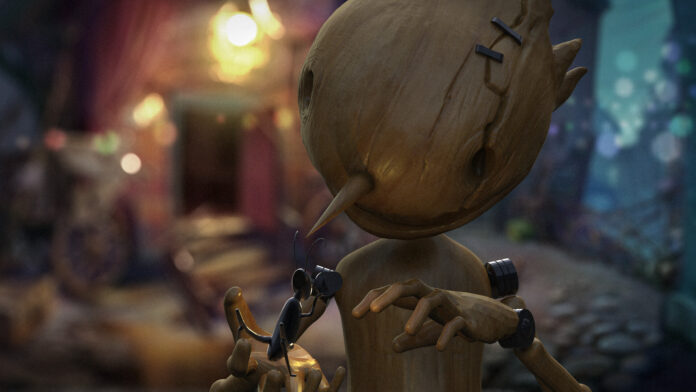 There are some stories that you’ve seen told so many times that it’s tough to get excited about any new version. Pinocchio is probably one of those, as it’s been adapted by multiple filmmakers even in just the last few years. But when Guillermo Del Toro does it, you know you’re in for something different. After five long years of production, Del Toro’s Pinocchio is coming to Netflix this fall. And as promised, Del Toro’s version puts a new spin on the tale of the wooden puppet who wishes to be a real boy.

Del Toro’s stop-motion animated Pinocchio delivers a darker take on the story, that much is instantly clear. Co-directed with Mark Gustafson (Fantastic Mr. Fox), it’s also clear that Del Toro’s ability to wring human emotion from creatures big and small (this is the guy who won an Oscar for The Shape of Water!) is well in place.

Leading the voice charge is Gregory Mann as Pinocchio, with Ewan McGregor as Cricket, and David Bradley as Geppetto. They’re joined by Finn Wolfhard, Cate Blanchett, John Turturro, Ron Perlman, Christoph Waltz, and Tilda Swinton. Alexandre Desplat, who scored The Shape of Water, returns to provide the music here, too.

I absolutely love his take on Cricket. The entire thing is stunning to behold, and you can see why Netflix is holding this until the awards season months.

Academy Award®-winning filmmaker Guillermo del Toro reinvents Carlo Collodi’s classic tale of the wooden marionette, who is magically brought to life in order to mend the heart of a grieving woodcarver named Geppetto. This whimsical, stop-motion musical directed by Guillermo del Toro and Mark Gustafson follows the mischievous and disobedient adventures of Pinocchio in his pursuit of a place in the world.