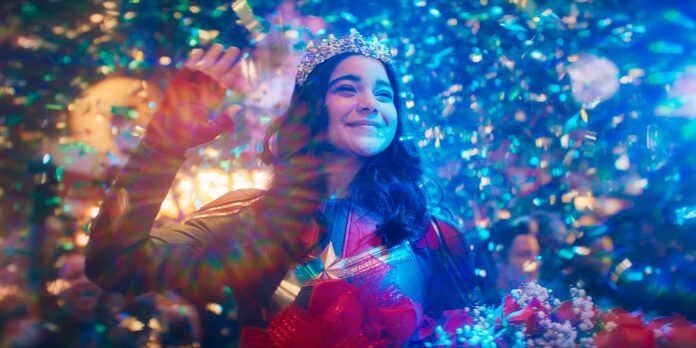 The first thing you’ll notice about Ms. Marvel are the colors. The latest MCU series on Disney+ is also its most vibrant, fitting for a character as full of life as Kamala Khan. As played by the amazing newcomer Iman Vellani, Kamala is a blast of much-needed youthful energy to Marvel’s small-screen offerings. Kamala’s struggles are familiar ones as we’ve seen teen superhero stories before, but that’s also what makes her so relatable. She has crushes on the boys at school, she contends with her overprotective Pakistani family, and worries about how she fits in with the others her age. Kamala also just happens to be an Avengers superfan, with a love for Captain Marvel that is expressed through her art and fan-fiction. As familiar as certain aspects of Ms. Marvel might be, Kamala Khan is one of a kind.

Disney made the first two episodes of Ms. Marvel available ahead of the June 8th premiere, and what you get is a show that’s a little bit Sixteen Candles, a little bit Runaways. Kamala is an extraordinary girl even before she acquires the powers (altered from her stretchy comic book version) that would send her life into a tailspin. Like most young people, she years for freedom and individuality. But in her Muslim-American family these things are hard to come by. While her older brother can do pretty much whatever he wants, especially since he’s getting married, Kamala’s parents are strict with her, denying her parties, the cool clothes to wear, and more. But they mean well, even if Kamala doesn’t recognize it.

In a plot point that’s quite similar to the recent Avengers video game in which Ms. Marvel is a key figure, Kamala yearns to attend AvengersCon, an expo for superhero fanatics just like herself. She and her tech wizard best friend Bruno (Matt Lintz) cosplay as their favorite Avengers, with Kamala later aiming to win a Captain Marvel costume contest. Interestingly, Ms. Marvel is the first series to really explore the corporate side of the Avengers, similar to how The Boys portrays the marketing side of The Seven. They are as much corporate entities as anything else, drivers of merchandise, and one Avenger even has a podcast that we learn about. From a kid’s perspective, all of this is tremendously exciting, and one of the show’s best aspects is how this is all folded into Kamala’s life.

Another key component is Jersey City. Kamala’s hometown is a mix of cultures unseen in the MCU, with Pakistani grocers and restaurant owners speaking Urdish. Her story couldn’t be told anywhere else; it’s special in a way that fantastical places like Asgard can’t be. Kamala reimagines the world around her into a neon storyboard for her cinematic imagination. As depicted by Bad Boys for Life directors Adil El Arbi and Bilall Fallah, Kamala’s home is the perfect place for a superhero origin story.

So early in the series, Ms. Marvel has yet to establish any stakes beyond what you might find in a John Hughes movie. A family trinket belonging to a Khan misfit eventually gives Kamala her Green Lantern-esque abilities, and there’s some lighthearted fun as she tries, and fails repeatedly, to learn their extent. But those hoping for the life-of-death gambles seen in other Marvel shows may find this one to be a bit too airy. However, I expect that won’t be the case and that viewers will instantly fall in love with Kamala Khan. Her spirit, charm, and yearning for big Marvel adventure are infectious.