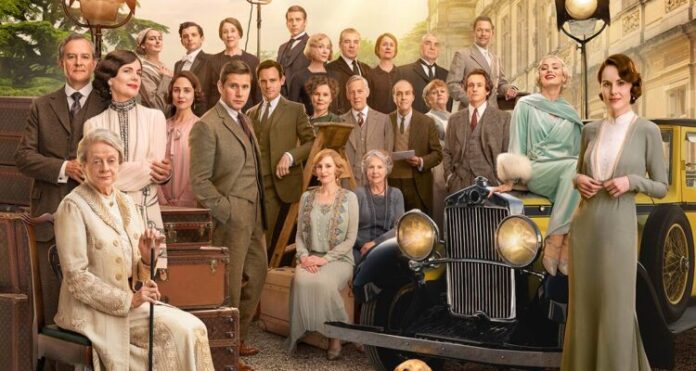 Has it been three years since we last got to hang out with the Crawleys and the downstairs staff at Downton Abbey? At the time, I entered the film as a complete noob to these characters, having largely written the show off as stodgy British stuff that didn’t interest me. Well, I was an idiot. The film was absolutely lovely, and penned by creator Julian Fellowes in such a way that it worked for the series’ devoted fans, and newcomers like myself. And while I still haven’t caught up with the show, I’ve been looking forward to Downton Abbey: A New Era to see if my previous enjoyment was just a fluke.

It definitely wasn’t, and now I’m starting to think maybe it’s time I take the leap and watch the entire series run. Downton Abbye: A New Era is a more light-hearted, altogether freeing film than the first, which could be a bit stuffy. It’s also what I imagine the Downton equivalent of “fan service” to be, as multiple characters find love, resolve lingering mysteries, find new career paths, and chart a new path forward at a crucial time when the world is becoming more modern. Downton Abbey, even in my limited experience, has felt like this place stuck in time, like a fly in amber. But Fellowes, who has written practically every single word since its creation in 2010, ponders the future of Downton Abbey and the people whose lives and livelihood depend on its sturdy castle walls.

There are essentially two major plots running through the film, although one of the things I’ve grown to love is that nearly everyone has SOMETHING going on. Few are sitting stagnant, and every line of dialogue has worth. It’s 1928, and Downton Abbey is facing economic hardships, with new stewardess Lady Mary (Michelle Dockery) concerned about what to do. Fortunately, it’s at this moment that a film crew led by a handsome director (Hugh Dancy) comes calling with a pricey offer to shoot at the estate, disrupting the Crawley family (many of which have a passionate dislike for Hollywood types) and exciting the domestic staff. Meanwhile, the beloved and still very ill Dowager Countess (Maggie Smith) has come into possession of a villa in the south of France, gifted by a mysterious man from her past. The legal shenanigans surrounding it call for some of the most prominent characters, Robert Crawley (Hugh Bonneville), his wife Cora (Elizabeth McGovern), the newly-married (and somewhat bland compared to last movie?) Tom Branson (Allen Leech), and the loyal, always unretired Mr. Carson (Jim Carter) to depart for a getaway to check the place out.

The division of characters and major plots does make the film feel like a couple of episodes mashed together, but I think that’s actually a good way to maintain the tone of the series. Each storyline has its benefits, but the movie shoot is definitely the most enjoyable and you can tell Fellowes was having a ball putting the buttoned-up Downton regulars into the freewheeling world of showbusiness. The transition from silent movies to talkies causes a number of comic mishaps, including the realization that gorgeous star Myrna Dalgleish (Laura Haddock) has a thick blue-collar accent that makes her unsuitable for the classy material. This ropes in a reluctant Mary to an unwanted spotlight, while she also catches the romantic eye of the director. Meanwhile, Dominic West makes an impression as roguish star Guy Dexter, who charms everyone but becomes friendly with Mr. Barrow (Robert James-Collier) most of all. The movie-within-a-movie aspects are cleverly done to show how creative filmmakers had to be at that strange moment of transition, while also are just entertaining for the chaos it causes within the estate.

Your enjoyment of Downton Abbey: A New Era will largely depend on your investment in the characters. With so much going on and such a large ensemble, it’s possible your favorite won’t get nearly enough time. For me, I’m a fan of Lady Mary so getting a chance to see her take charge of Downton, while fighting off her passions and becoming a movie star, was a real treat. And of course, Smith’s Dowager Countess is at the center of everything, although given her situation she’s a bit less venomous than in the previous movie. If you’re a fan of the earnest Mr. Molesley (Kevin Doyle) there’s a special surprise waiting for him, and based on the two screenings I attended Molesley has a lot of people who have been waiting to see him finally be happy.

There are plenty of these moments that feel like Fellowes is bringing the story of these characters to a close. “A New Era” suggests a lot of things. Where does Downton Abbey go from here? As the film draws to a close, Fellowes seems to be wrestling with that idea himself. Realistically, this can’t go on forever, but Downton Abbey: A New Era shows that there are still plenty of stories left to tell about this wonderful, tight-knit group. I think part of the appeal is that there’s no other show where we can see employers and their staff truly treat one another like family. Sure, there’s the whole “upstairs/downstairs” aspect but that division doesn’t truly divide them. Once you’re Downton, you’re part of the family, and there’s something comforting about that.

Downton Abbey: A New Era opens in theaters on May 20th.