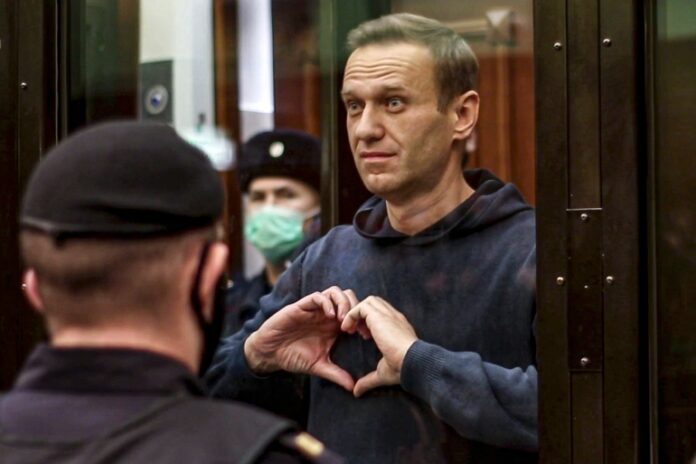 Stepping in front of documentarian Daniel Roher’s camera crew is nothing new to Alexei Navalny. With his bright blond hair and boyish charm at the prime age of 45, the Russian opposition leader has been broadcasting and making media appearances since the beginning of his career. From YouTube testimonials to public speaking, he knows exactly what to say to rally support and capture Putin’s ire in the same breath.

Publicly, Navalny comes off as a suave, intelligent leader willing to sacrifice everything to expose Putin and government corruption. In Roher’s new film, Navalny, we see a different side to him, one just as passionate but less serious than he has presented himself. Ironically, the documentary starts at the most crucial point of his political career, not at its beginning.

In August 2020, Navalny took a flight from Siberia to Moscow. Through footage taken at the scene,  we see him become violently ill. He is taken to a Russian hospital in Omsk where the doctors refuse to let his wife, Yulia Navalnaya, see him or oversee his care. Assuming it was an attempted asassination, she and his team manage to get him airlifted to a German hospital.

It turns out they were right. Navalny was poisoned with Putin’s nerve gas of choice; Novichok.

Roher keeps a close eye on Navalny and his family as he starts to recover and ultimately solve who tried to carry out the hit. They team up with a “very kind Bulgarian nerd with a laptop,” journalist Christo Grozev, who is able to hack into airline databases and create a list of possible suspects.

This evolves into the film’s most thrilling sequence, where he actually approaches the killers. In a sequence straight out of a cold war era spy film, Nalavny conducts the calls himself, tension rising at every word. Without spoilers, he walks away with what he needs to publicly call out the assassin who tried to kill him.

What is fascinating about Rohr’s approach is that we see Navalny’s life beyond the public eye and politics. He feeds donkeys with his wife, cracking jokes the entire time. They talk about which video games he likes to play with his children. What becomes evident throughout the film’s 130 minute runtime (besides how blatantly corrupt the Russian government is) is Navalny’s quick wit and endearing sense of humor. He makes TikTok videos, participating in the “How Bizarre” trend. He constantly makes jokes about his situation, much to his wife’s dismay. Roher successfully humanizes him to an English speaking audience beyond the torment and violence he has faced at the hands of the Russian government.

While the crew follows Navalny around Germany, Roher also interviews him one-on-one. In this exercise, we see his brain firing on cylinders, searching for the best way to answer questions. His past is brought up as a past Russian Nationalist and he still defends his actions of marching with neo-fascists. However, the film doesn’t question him for long, arguing that in order to overthrow someone like Putin, you must band together with people you don’t agree with.

It’s easy to see why Navalny won the audience award at this year’s Sundance Film Festival. As a leading man, Navalny really has it all. He’s funny, charming, passionate, and a devoted family man. It’s heart pounding to watch him navigate secret phone calls with Russian operatives with biting grace.

Navalny is currently in a Russian prison on Putin’s orders, despite his public and international support. It’s doubtful with the current war happening in Ukraine that this documentary will see to his swift release, but how Roher’s work will be received– how Alexey Nalavny will be received– might indicate just how much time Putin has left.

Navalny premieres on CNN on April 24 and HBO Max May 26.