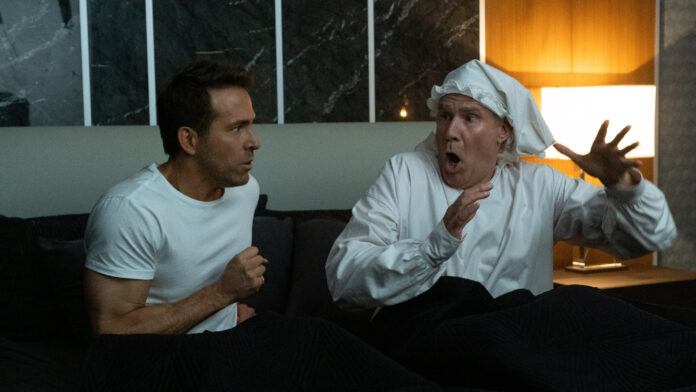 Halloween candy has barely been touched so naturally, it means it’s time for the first Christmas movie of the year. The first one coming down the chimney is Apple TV’s Christmas Carol remix, Spirited, starring Will Ferrell and Ryan Reynolds. A full-blown spectacle and musical, the film’s greatest asset comes in the form of Benj Pasek and Justin Paul’s original songs. As you can expect from a Will Ferrell/Ryan Reynolds production, there’s plenty of quippy banter, but an overstuffed script weighs down this Christmas tale.

Ferrel is back spreading holiday cheer, this time in a funny coat as the Ghost of Christmas Present. Working as a part of a team to infiltrate people’s dreams to change their unkind ways, he dreams of one day retiring and returning to the real world to live out his life. With his own fears holding him back and his desire to create real change eating away at him, Ferrel encourages the ghosts of Christmas Past, Future and Marley to take on an unredeemable. This is where Ryan Reynolds comes in with all his snarky glory.

Playing the CEO of a divisive media strategy consulting firm, we are led to believe that his company is responsible for some of the greatest online beefs without straying into political or racist rhetoric. Helping him create chaos is his number two, Kimberly played by Octavia Spencer. Once he falls asleep, Reynold’s Clint Briggs is immediately resistant to what these Christmas ghouls are doing, interrupting Mareley’s (Broadway star Patrick Page) creepy song and dance and seducing the ghost of Christmas Past (Sunita Mani).

As the Christmas Carol story plays, co-writer and director Sean Anders and co-writer John Morris pack the story with unneeded twists and turns. While Pasek and Paul’s musical numbers are mostly endearing, the dancing, lighting, and colors of this production are overwhelming. Add that to the packed and hard-to-follow plot, and at its worst, Spirited feels like an overstimulating mess.

The film is at its best when it is at its most simple when Will Ferrell spits a clever one-liner and sings a song about it. No stranger to Christmas movies having made Elf, Ferrell works well as the Ghost of Christmas Present, full of holiday cheer and sincerity. It’s Reynold’s that brings down the festive vibe. Having played the same character for the last few years in Deadpool, Red Notice, and The Adam Project, Reynolds’ snarky asshole character just doesn’t work as the Scrooge type. Anders and Morris use Reynolds’ onscreen personality to derail the plot’s direction so often, the device gets old fast. You want the Christmas dream team to fail and find someone else to save as the Clint character just gets in the way of the story.

Spirited is not totally irredeemable. However, Ferrell’s performance, a clever lyric, and the occasional joke are not enough to save Christmas from Ryan Reynolds and the overstuffed plot.

Wolverine/Deadpool Has Been A Long Time Coming. Jackman Envisions a ’48 Hrs’ Dynamic