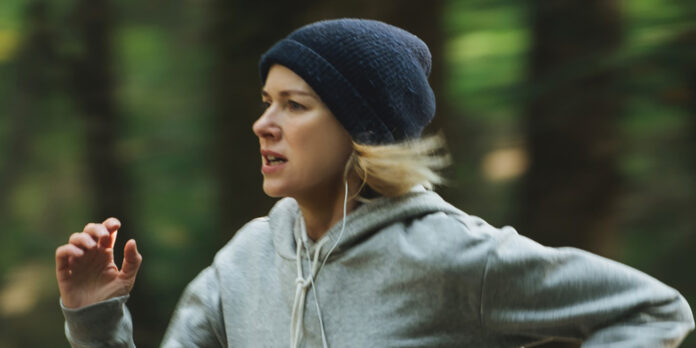 NOTE: This review was originally part of our 2021 TIFF coverage when it was titled Lakewood. It has been edited and updated.*

Screenwriter Chris Sparling knows his way around a single-person thriller, his Buried script providing Ryan Reynolds one of his finest early-career performances. Veteran director Philip Noyce was a choice pick for the mostly single-location flick Dead Calm. And star Naomi Watts is one of the most captivating actors on the planet. But The Desperate Hour, a film that orients itself around a mass shooting event but is really about a jogger who turns herself into a self-made gumshoe, is an absurd exercise that’ll make you feel like you’ve been doing laps for 90 minutes.

To be fair, The Desperate Hour is gripping stuff and it had me hooked in the first 5 minutes. That’s a good sign. It’s all running downhill from there, though. Watts plays Amy Carr, a mother who has seen her teen son Noah (Colton Gobbo) pull away in recent months. That’s understandable given a recent tragedy that saw the family patriarch die suddenly. When Amy goes on her daily morning jog, she soon learns of a mass shooting at Noah’s high school, and does what any mother in her situation would do which is try to get to him as fast as possible.

Just kidding, that doesn’t happen at all!

Instead, The Desperate Hour finds Watts trotting through a seemingly endless forest like she’s stuck on the planet Endor. I mean, she goes for miles and miles, with Sparling’s script coming up with increasingly ludicrous excuses for why she’s not getting anywhere. The GPS says she’s 15 minutes away, okay cool, but is Uber not a thing? Or a taxi? She clearly has cell service. When she does finally emerge suddenly there are no cars on the road anywhere. It truly does take on the shape of some supernatural horror event, and for a while I thought we’d learn that Amy is stuck in some weird timeloop or something.

But nope, The Desperate Hour is a ridiculously over-serious movie and you’ll be hooked on it for all of the wrong reasons. Amy proceeds to call everyone under the sun to try and figure out what’s going on and if, Heaven forbid, Noah might actually be the shooter. Sparling teases this possibility cleverly before dropping it like a sack of potatoes, in favor of Amy playing amateur detective with only her phone as a resource. In some ways, the film takes on a similar feel as Searching, which saw a father use only his computer to investigate his child’s disappearance. Only you’ll be too busy laughing at Amy as she runs-and-talks her way through a fact-finding campaign. She calls all sorts of people; friends, police, a mechanic who works on her car, random folks. Her requests from them get more insane as she gets more desperate, but they always come through as long as she “really needs” them to do it, even if her request is illegal. That’s mighty nice of them. It’s like everyone only cares about her kid and not the others trapped inside with a gunman.

Watts does her best here, and she’s genuinely quite great and expressive in the way this kind of movie demands. She can make you believe pretty much anything, and if there’s a positive reason to watch this she is it.  There’s a terrific moment later in the film when Amy realizes that all of her meddling (which includes talking to the shooter on the damn phone!!!)  may have endangered her son even more, and the look on her face is truly heartbreaking. It’s just too bad Watts doesn’t have better material to work with. Sparling’s screenplay ratchets the tension up quickly, and you get a real sense of dread early on as police cars go buzzing past Amy during her run. But once the plot is set in motion it has nowhere to go, practically running in place.

The sad thing about The Desperate Hour, beyond how silly it is, is that it thinks it’s saying something about gun violence. The film concludes with a character making a declaration to do something about the problem, which affects kids all around the world. That’s a worthy message to send. Too bad this isn’t a movie that actually has anything to say about stopping gun violence, except that if your kid is ever in a similar situation, be sure to bring your phone charger.

The Desperate Hour opens in theaters and VOD on February 25th.