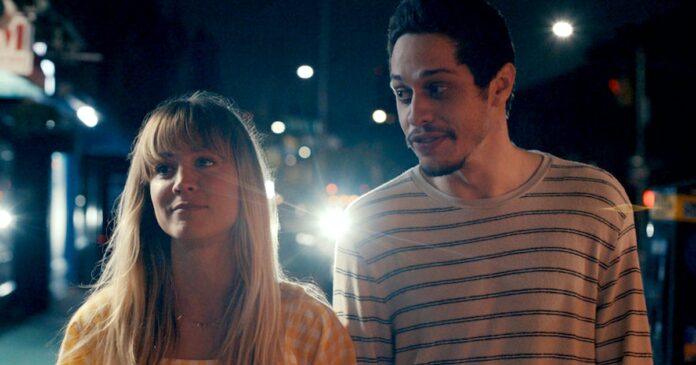 My first thought after the trailer for Peacock rom-com Meet Cute was if stars Pete Davidson and Kaley Cuoco are dating yet. Given Davidson’s track record it’s not too far outside the realm of reality, and I assumed there would be some paparazzi buzz surrounding this film that I hadn’t heard of before ten minutes ago. But it seems I’m wrong, and the two are simply co-stars in this comedy that adds a sci-fi twist to the 50 First Dates premise.

Cuoco and Davidson star as Sheila and Gary, who look like they’ve been the perfect couple since their magical first date. However, it wasn’t like that at all. Sheila has been using time travel to perfect that first encounter over and over, but it’s never quite enough and she decides to take it a step further.

The film is from director Alex Lehmann, who explored another complicated relationship with 2016’s Blue Jay, and the underrated 2019 comedy Paddleton, both starring Mark Duplass.

When Sheila and Gary meet, it’s love at first sight – until we realize their magical date wasn’t fate at all. Sheila’s got a time machine, and they’ve been falling in love over and over again. But when the perfect night is never quite enough, Sheila travels to Gary’s past to change him into the perfect man.