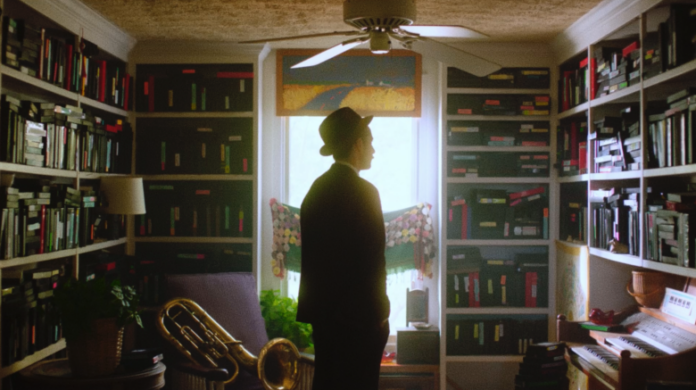 Strawberry Mansion is a futuristic sci-fantasy love story that brings together two old souls from two walks of life that are caught in the same web of power, deceit, and greed. It’s 2035 and James Preble (Kentucker Audley) is a beleaguered taxman who is in the midst of dreaming when nightmarish thoughts race through his brain and he’s on the verge of losing his mind. All seems lost until a “buddy” (Linas Phillips) appears, whose whole demeanor screams “greasy salesman”, and offers Preble all the things that suggest, more like demand, calming him down. Most notably, a giant bucket of Cap N’ Kelly fried chicken and a bottle of Red Rocket soda Gross but OK, dreams can be funny like that, right? Preble awakens from his creepy dream, donned a retro 60s suit and hat, hops into his equally aged vehicle, and finds himself in the order line of Cap N’ Kelly ordering a bucket of fried chicken, red rocket drink, and a giant chicken shake to boot. The chicken shake is a literal cup of liquified chicken, thick ass gravy, and I mean, WTAF?!

James Preble (Audley) is a dream auditor for the government and his responsibility is to collect and update the dreams of an elderly eccentric woman who has neglected to do so for years. He arrives at a run-down and strawberry colored farmhouse that’s surrounded completely by gorgeous countryside. The woman he has to audit is Arabella Isadora (Penny Fuller), a lifelong dreamer who remains resolutely analog, circumventing the surveillance state with VHS tapes and a curious homemade, rainbow lite headgear. She welcomes Preble into her home and offers him room and board considering he has roughly 2,000 tapes to go through. As Preble works his way through Bella’s archive of the unconscious, he begins to fall in love with visions of her younger self (Grace Glowicki). But all is not well in dreamland as dangerous family secrets and a rogue’s gallery of blue demons and fried chicken pitchmen threaten to set the lovers’ paradise ablaze. Preble and Bella jump from dream to dream as they try to escape from the modern, monetized dreamscape that aims to cash in and control them while also discovering and appreciating the imaginative excitement, peace, and tranquility of Strawberry Mansion.

Strawberry Mansion is written and directed by Kentucker Audley and Albert Birney. I love, love, love the Audley and Birney tackle the idea of our dreams no longer being our own and have created an alluring story full of visual wonderment and genuine intrigue. Dreams are instead infused with product placement and auditors assess unpaid taxes on our most private reveries. With platforms like Google and Facebook who use your search history to blast you with immediate ads is an uncomfortable norm society is currently settling with and it’s not so crazy to think that this type of story could legitimately be real..if not already happening. All conspiracy theories aside, I thoroughly enjoyed the artistic environment and stunning imagery of this entire film. It reminds me a lot of one of my favorite films of all time, Eternal Sunshine of the Spotless Mind, as it dives poetically into private thoughts and feelings and the connection it holds between two people. Idiocracy is another film that comes to mind in similarity as there’s a scarily true but comedic spectrum of a doomed future that’s ruled by stupidity. I love the use of colors and lucid creativity that exudes nostalgic animation styles to using simple costumes and props to make even the lucid dreams still feel tangible and realistic. Strawberry Mansion is one of my top favorites of the year so far. Definitely recommend giving it a watch.

Strawberry Mansion is now playing in select theaters and available on VOD on February 25th.