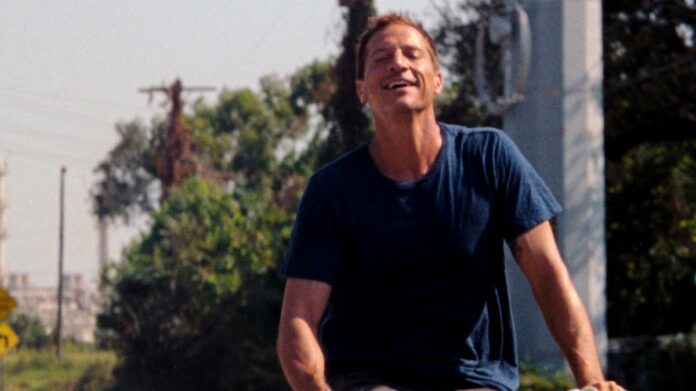 The sounds of NSYNC’s “Bye Bye Bye” blast in the opening moments of Sean Baker’s The Florida Project followup, Red Rocket. The guy listening to it seems too old for it; Mikey Saber (Simon Rex) is headed back home to Texas with his tail between his legs. Dirty, battered, bruised physically and egotistically, Mikey hoofs it to the home of his ex, Lexi (terrific Bree Elrod), and despite her misgivings, as well as those of her mother Lil (Brenda Deiss), he worms his way back into their lives with big smiles, big promises, and big charm.

Red Rocket is like the cinematic embodiment of Mikey Saber. On the surface, it doesn’t look like much, perhaps like something you should stay away from. But the more of it you take in, the more you come to appreciate the strange, profane, extremely graphic journey it takes you on. Mikey, who looks like a washed-up MTV VJ from yesteryear because that’s exactly what Rex used to be, is utterly shameless. A former porn star run out of Los Angeles for lord knows what, he’s the type who will literally say anything to get what he wants in that moment. It’s no coincidence the setting is Texas and the year is 2016, with the sounds of the ultimate con artist Donald Trump playing on TVs everywhere. The hustle was everywhere, not just on the national scene but to the lowly town of Texas City where Mikey talks up stories of the past to win over old “friends”, and hypes up his accomplishments as an actor in adult entertainment. He’s mighty proud of those AVN awards, in particular winning Best Oral three years in a row, a boast that gets questioned a lot as it should.

Mikey’s a creep, that much we know, but he also seems like a decent enough sort. Or, at least, he’s really good at putting a good face on his schemes and generally appears harmless.  And yet when he meets the cherubic 17-year-old Strawberry (future star Suzanna Son) working at the Donut Hole and takes a liking to her, we are instantly wary. There’s no way his intentions for her can be any good whatsoever, it’s just a matter of how badly she’s going to get hurt by it.

Baker’s films never follow any sort of strict narrative structure. Red Rocket meanders about similar to The Florida Project, exploring people on society’s fringes. This armpit section of Texas, dotted with condemned houses and meager storefronts consumed by a plethora of giant oil refineries, is as hopeless as the poverty-stricken stragglers of Baker’s prior work, only there’s no Disney World to run off to. No fantasy world to escape into. The aimlessness gets out of Baker’s control at times. I think he becomes too enamored with Rex’s admittedly energetic, convincing performance and lets him run wild. Rex, who also was a solo porn actor for a while, does carry the film on his shoulders. He is literally in every scene and works well with his less experienced co-stars, who give the film a natural, raw feeling. It’s not an easy role; some of what Mikey does will make the audience uncomfortable. There’s a lot of sex, a lot of graphic nudity (um, a lot of swingin’ goin’ on), and your mileage may vary depending on how comfortable you are with such things. Red Rocket is hilarious and light enough on its feet that you almost don’t mind the comparative lack of cultural insight. This is like the polar opposite of a “hometown boy makes good” story, but you can’t help yourself from rooting for Mikey to good with the tools he’s got.

A24 will release Red Rocket into theaters on December 10th.