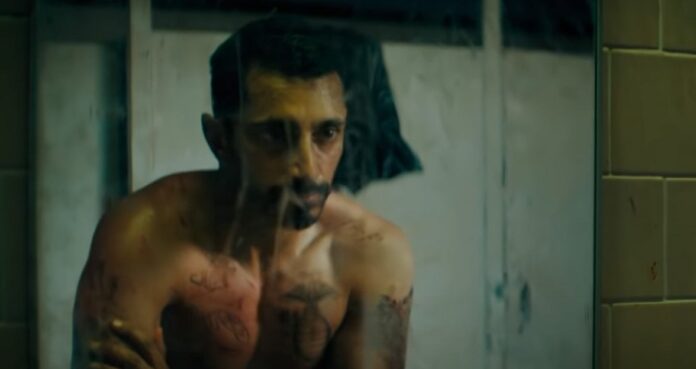 *NOTE: This review was originally part of our Toronto International Film Festival coverage.*

Who doesn’t love a good twist? When a movie subverts our expectations with an unexpected swerve it can be exhilarating, but it all depends on what follows being just as interesting as what came before. That’s not so much the case for Encounter, the latest film from Beast director Michael Pearce, who casts Riz Ahmed in a bit of sci-fi sleight-of-hand that offers him the chance to play a deeply complex father role, but can’t escape that the original premise carried so much more potential.

Penned by Pearce and upcoming Gotham PD showrunner Joe Barton, Encounter begins with a crashed asteroid and what appear to be microscopic insects in the midst of a planetary infestation. We’re introduced to Malik (Ahmed), a former soldier whose skittish behavior belies his paranoia. He sprays himself with bug spray and obsesses over news reports about unknown viruses. Elsewhere, his estranged sons Jay (Lucian-River Chauhan) and Bobby (Aditya Geddada) live with their mother and her new husband, a white guy they jokingly call a “stick-up-the-butt”. She gets bitten by a mosquito and suddenly falls in. Something is happening. The camera highlights flying insets with a dangerous blue haze.

When Malik breaks into the home and steals away with his two boys, who he hasn’t seen in two years, he swears to them he’s been on a top secret mission to save the world from an alien threat. Encounter rolls out in Midnight Special-esque fashion, a father/son roadtrip with higher stakes than simply restoring familial bonds. And for a good stretch the film works out quite well on this wavelength. That the characters are all people of color and Pakistani background offers a fresh face to familiar ground, and informs Malik’s various encounters with law enforcement, who look at him suspiciously, and cashiers who are just as suspicious.

However, when Malik makes a phone call to his parole officer Hattie (Octavia Spencer), the jig is up. Encounter shifts gears into something more psychological and less satisfying, especially since the creepy sci-fi aspect was so well done up to this point. There was a genuine sense of menace about this unseen threat that Malik was determined to rescue his boys from. What follows is a conventional thriller done in unconvincing fashion. There’s Rory Cochrane who half-asses it as a cop hot on Malik’s trail, while Spencer tries to make the best of a role that is somewhat ridiculous, not just for her interactions with Malik but with the police. Both sons become increasingly annoying, making you wish Malik would just drop them off at the nearby McDonald’s or something. They’re a hindrance to the mission! Dump them brats! The action picks up, too, but it feels out of place in the context of this story. A shootout with a pair of right-wing militia types is well choreographed and helps pick up the flagging pace even if it comes out of nowhere.

It’s really all about timing. I don’t mind that Encounter turns out to be a very different movie than how it started. The problem is when the twist happens, and a Shyamalan-esque “pull the rug out” moment at the end would have had more impact. The moment we lose Malik’s singular perspective Encounter falls apart and never recovers, despite Riz Ahmed’s best efforts.