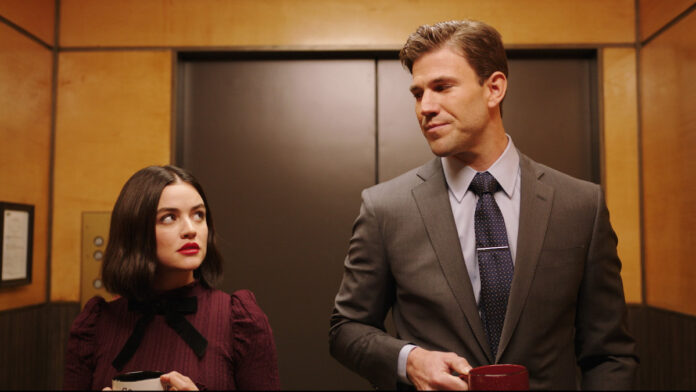 In 2016, romance author Sally Thorne released The Hating Game. If you follow the genre at all, you would know that the book quickly became one of the most popular contemporary romance novels in recent memory. Now Vertical Entertainment is cashing in on the book’s built-in audience with the film version, directed by Peter Hutchings and written by Christina Mengert.

Lucy Hale (Pretty Little Liars) and Austin Stowell (Fantasy Island) play Lucy and Joshua, two rival assistants at a recently merged publishing company. While the former is friendly and hardworking, giving off “Zooey Deschanel school librarian” vibes, the latter is organized and cold, focusing more on results than people. The two ignore the obvious romantic tension they share in order to compete for the same promotion. However, as their feelings start to bubble over, romance becomes inevitable.

Though mostly stale with a predictable plot, Mengert’s script does have a few clever quips and bantery moments. While Stowell and Hale seem to have a tepid form of chemistry, The Hating Game’s main pitfall is characterization. For the most part, characters should be likable in romantic comedies. Instead, both Lucy and Joshua are horrible people. Lucy tries to make him jealous by going out with their co-worker Danny (Damon Daunno), who is completely into her. She essentially forced Danny to go out with her despite having plans with other people. She completely leads him on.

Throughout The Hating Game, you get the sense that despite the angry tension Joshua and Lucy have built up that they don’t know each other really well. But that doesn’t stop Joshua from painting his bedroom the same color as Lucy’s eyes. While this may come off sweet in the novel where more context can be given and inner feelings can be revealed, in a movie the whole thing feels forced and creepy.

Once Joshua and Lucy decide to put their rivalry aside, Danny’s character doesn’t go away. Instead, he shifts from a potential love interest into the “emasculated male best friend to the female protagonist” role. The change doesn’t fully work, feeling unnatural and forced.

This dynamic can also be said for Joshua’s relationships with his family. An entire subplot revolves around his somewhat estranged brother who is about to marry Joshua’s ex and his father’s resentment towards him for going into publishing instead of medicine. By the film’s end, that particular plotline feels unresolved.

Like most things in The Hating Game, the story and its execution fall flat, proving that sometimes it’s better for books not to get adapted.

The Hating Game is in theaters and on On-Demand Friday. Watch the trailer below.