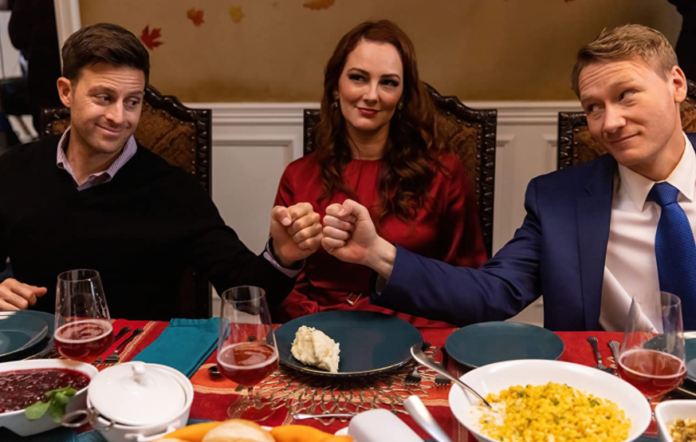 Funny Thing About Love is a quirky but quickly forgettable holiday RomCom that’s packed full of predictability and very little laughs. Samantha Banks (Summer Bellessa, Amber Alert) is on top of the world! She owns and operates a successful business and has recently been given a sizable offer to sell her business. Adding to the pressure, Samantha is given until Thanksgiving Day to give a response. Pressed for time, especially over the holiday, Samantha decides to visit her family and bring along her over the top, lawyer boyfriend and power of attorney to her business, Bryce (Jason Gray, Studio C). Upon her arrival, Samantha discovers that they invite her stand-up comedian, ex-boyfriend Luke Hudson (Kevan Moezzi, Last Comic Standing) who incidentally, is “the one that got away” to stay over. Her Thanksgiving holiday has been thrown into a tailspin by her scheming but lovable family.

Funny Thing About Love is the latest holiday romantic-comedy written and directed by Adam White (Inspired Guns, Chick Magnet) and produced by Adam Montierth and Donovan Montierth. The film includes familiar faces who do have an uncanny ability to bring smiles and a bit of laughter which this holiday season is certainly in need of this year. Samantha (Bellessa) and Bryce (Gray) are clearly an unmatched pair but it’s her fun and witty family that respectively stand out the most. Her parents, John (Pat Finn, The Middle) and Linda (Alaina Beauloye, That 80s Guy) are more the parental backdrop. They have a few lines but play their roles simply as such. Samantha’s brother Charlie (Jon Heder, Napoleon Dynamite, Benchwarmers) and his wife (Brooke White, American Idol) are a fun couple. They have no problems getting to the point, protective over Samantha, and are a driving force to her love triangle dilemma. Grandpa Joe (Barry Corbin, Netflix’s The Ranch) is by far the best character of the whole film. He can’t have sweets however, that doesn’t stop him from coming up with fun and sneaky ways to make off with any delicious desserts he can get his hands on. Especially pumpkin pie!

John Heder and Barry Corbin are fantastic. They bring the laughter and the most believable performances. Funny Thing About Love is a cute movie with some notable moments but leaves no room for any surprises. The love triangle between Samantha, Bryce, and Luke is way too predictable with the entire film pushing the notion that Samantha should be with Luke. Bryce is overly obnoxious and it’s beyond clear who Samantha will eventually end up with. What’s even more frustrating is that the majority of the cast lacks any emotional depth and there is absolutely no chemistry felt between Samantha and Luke at all. If it wasn’t for the comedic relief of Heder and Corbin, this film would be a total flop. Luke even plays an up-and-coming stand-up comedian and even his “jokes” felt phony and staged. Cute and family-friendly however, this film gets a holiday “Humbug” NO from me.

Funny Thing About Love will be available in theaters and rent to own on Digital HD internet, cable, and satellite platforms on December 3, 2021.