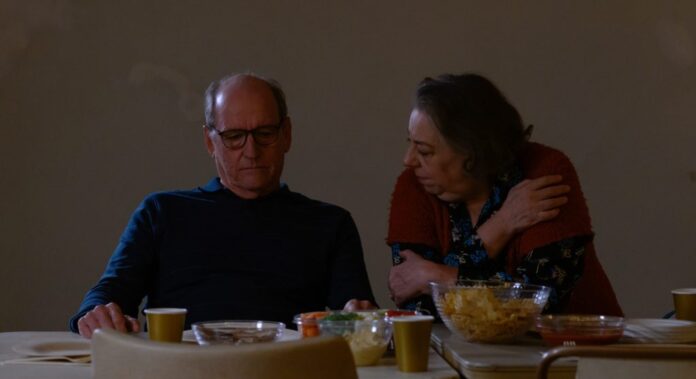 The always brilliant Richard Jenkins plays the patriarch of the Blake family, Erik. We first meet him as he silently picks apart his daughter’s new and empty New York apartment. He is there with his wife, Deirdre (Jayne Houdywell), his mother who is suffering from Alzheimer’s (June Squibb), and his bewildered eldest daughter Aimee (Amy Schumer) to celebrate Thanksgiving with youngest daughter and hosts Brigid (Beanie Feldstein) and boyfriend Richard (Steven Yeun). Of course, each member comes with their own baggage and resentment towards the other.

As the night goes on, the old apartment starts to fall apart just like the family’s conversations. Religion, weight, failed careers, 9/11, and insults fly back and forth between them as the meal is cooked and eaten. Jenkins gives a masterclass in driving tension forward, knowing exactly when to lay on and off the gas. Like most of his performances, his role in The Humans proves that he is one of the greatest living character actors working today.

Though known for her standup comedy, Schumer proves she can run with this troop of dramatic actors. Of course, she does have most of the comedic lines that she delivers with expert precision. However, her lingering sadness is the most captivating. Steven Yeun also delivers a solid performance as the supportive boyfriend.

Houdyshell (most recently seen in The Only Murders in the Building) reprises her Tony-Award winning role as mother and caretaker to her mother-in-law played by June Squibb. Though she doesn’t stand out as much as Schumer and Jenkins do, she gives the others the most to play off of.

Karam’s real star is the old and dilapidated Chinatown apartment where the film is set. Unlike the immaculate New York dwellings that are too good to be true for their poor characters to live in in real life, Brigid and Richard’s newest home truly is worse for wear. Lights burn out throughout the night. The paint is chipping, with one particular spot on the wall bubbling up from a leaking pipe. There is hardly any natural light as it faces “an interior courtyard” as Brigid calls it.

Slowly, Karam introduces us to this ghastly apartment, mainly when another character is monologing or insulting another. Often shooting from a distance, the room is always dark and the camera is angled around the corner as if we are voyeurs. It’s one of many techniques the director takes from the horror genre that adds to the calculated claustrophobia and anxiety of the piece.

As of now, A24 and Showtime have yet to announce if The Humans will be an official Oscar contender or if the studios will wait until the Emmys. If the Academy Awards route is chosen, the film could shake up the sound design category. Every creak and drip is amplified adding to Karam’s horror film approach. Silence is used as an auditorial weapon, with very little soundtrack being used. It’s smart and well-done which could give bigger projects like Dune a run for their money.

The Humans main issue is that it is 10 minutes too long. After a while, the horror elements and jump scares, though genius, feel expected. There is a secret held between the parents that is revealed towards the film’s end that doesn’t have the payoff Karam thinks it does.

Overall, The Humans is a brilliantly acted and technically sound film that is just as chilling as it is entertaining.

The Humans will be released on Showtime and in theaters on November 24. Watch the trailer below.