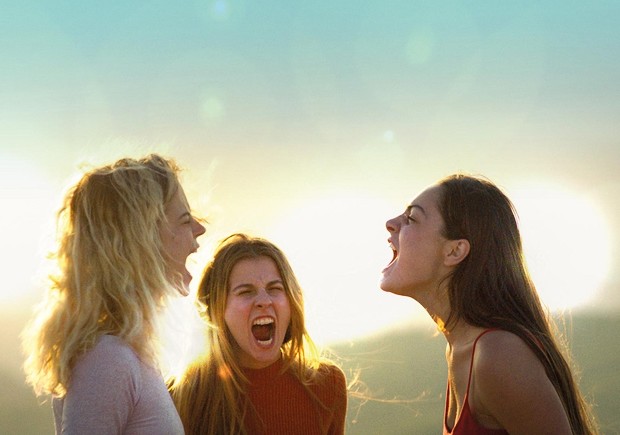 A small town, restless teens, and a yearning for something greater. This logline has been the heart of so many American coming-of-age stories we don’t even stop to consider it from another cultural perspective. Set it in a place like Kosovo where hopelessness seems to spring eternal, especially for young, rebellious females, and the formula can only change. Actress-turned-director Luàna Bajrami‘s aptly titled debut The Hill where Lionesses Roar is as full of life as it is a keenly observed look at three young women straining against the home that they love, but is nonetheless holding them back.

In this small part of Kosovo where the most exciting place to hang out is the nearby cemetary, best friends Qe (Flaka Latifi), Jeta (Urate Shabani) and Li (Era Balaj) waste a summer doing pretty much nothing. There’s not much to do but smoke and watch the world go by…slowly. The cemetary they often hang at a stark reminder of their desire to not spend the entirety of their lives in this sad place where prospects amount to working at the local hair salon or working the street corners at night. Home life offers no respite, either, more evidence that these girls only have one another to count on.

Bajrami is experienced enough not to overcoach her actresses, letting their playfulness shine through. It manifests in a bond between the central characters that immediately feels lived-in and lasting. The fearless Qe and enigmatic Jeta have designs on getting accepted to university as their way out, while Li puts her heart first in a relationship with a local boy. Their choices are impacted by the reality of life in Kosovo, where women are rarely chosen for higher education, making marriage the primary means of security. This unacceptable reality forces this pack of lionesses to lash out as small-time crooks, striking back against society and attaining the freedom that has been denied them.

In a surprising and welcome twist, Bajrami doesn’t let this crime spree define the entire movie. Rather than focusing on the criminal aspects and the illegally-obtained wealth, she stays on-target by exploring the autonomy that comes with it. While these moments of happiness are presented conventionally, think parties, nights out at the lake, etc., they hold greater weight because we know they are fleeting. Having a taste of the good life changes the nature of their relationship, introducing a romantic component that feels natural like so much of the film does.

Moving her observational approach in front of the camera, Bajrami takes a small role as a French girl who befriends Qe, while the other two look sideways at the foreign outsider in their midst. As Bajrami admires them up close and behind the lens, we can’t help but feel much the same way. This isn’t a movie where loyalty is ever questioned, and darker aspects of their lives (Jeta has an abusive uncle) are suggested but never highlighted. If anything, the film could have done more to get into the inner lives of Qe, Jeta, and Li, but what we get from them outwardly is still so powerful that we feel we know these characters fully. The Hill where Lionesses Roar ends on a more ambiguous note than Bajrami’s straight-forward storytelling needs, but it can’t dull the simply beauty of a film that cherishes female friendship in all of its many forms.