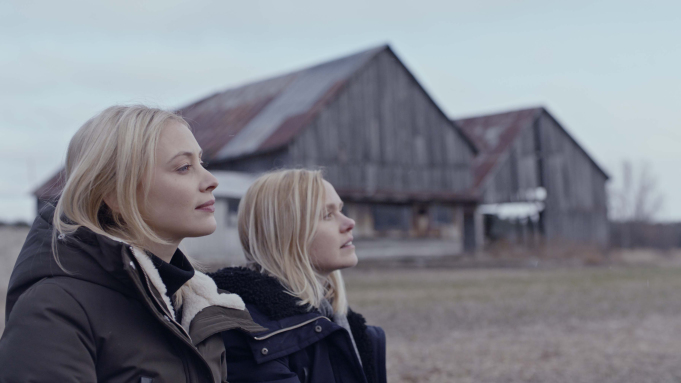 There are irreconcilable differences, and then there is what sisters Yoli (Alison Pill) and Elf (Sarah Gadon) face in Michael McGowan’s sobering, but somewhat stilted adaptation of Miriam Toews’ acclaimed novel, All My Puny Sorrows. The Von Riesen siblings are at loggerheads because one is trying to deny the other the one thing they want most in the world, and for very good reason. That thing is to commit suicide and not be in this world anymore, at all. The film is essentially a tug-of-war, a bookish sparring match as Yoli tries to express to Elf why she musn’t kill herself, while Elf tries to convince her sister to be okay with it.

Suffice it to say, emotions come pouring out, and considering the story is based on events in Toews’ life they come out raw and painful the way personal touches often do. Yoli is a failed writer with a teenage daughter and a dead marriage, while her sister Elf seemingly has it all. She’s beautiful, beloved by her husband and her fans as an accomplished concert pianist. And yet it’s Elf who despairs, and yearns for death in the same way their father (Donald Logue) did when he committed suicide years prior. When Elf finally makes an attempt on her life, Yoli travels to Winnipeg where she and her mother (Mare Winnigham) can try to change her mind.

In Toews’ novel and McGowan’s film there’s an acknowledgement that this situation is untenable and will likely end in tragedy. Conversations between Yoli and Elf bite with the sting of two people who already seem to know where things are headed. That allows for a surprising amount of pointed humor that can only be exchanged by people with that recognition…

“Congratulations on your upgrade to the psyche ward”, Yoli jokes.

At one point, Yoli suggests air-dropping Elf into Mogadishu to wake her up out of her despair.

To nobody’s surprise, Pill is fabulous at capturing Yoli’s desperation and anxiety, which present themselves in a flurry of tangents and self-depricating remarks. Her attempts to show that her own life sucks so why can’t Elf just cope fall on deaf ears, with Gadon projecting the suicidal sibling’s stubborness, despair, and at times, fragility. But All My Puny Sorrows can’t escape its wordy roots, and conversations that might have sounded good on the page come across abnormally when spoken aloud. Flashbacks do little to connect us with who the Von Riesen’s are, including their lapsed Mennonite background which is barely a factor. Ultimately, the film works as a powerful acting showcase for Pill and Gadon who, ironically, breathe some life into a heavy story engulfed in death.

‘All My Puny Sorrows’ Trailer: Alison Pill And Sarah Gadon Are Sisters Grappling With A Life And Death Decision

Review: ‘News Of The World’