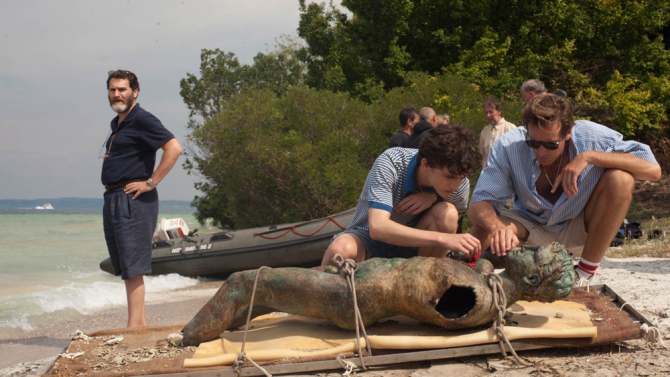 *NOTE: This is a reprint of Mae’s review from the Sundance Film Festival.*


If there’s one thing that director Luca Guadagnino is exceptionally good at, it’s making the location of his films just as much a part of the story as his characters. Call Me by Your Name is no exception. Based on the novel by Andre Aciman, Guadagnino’s film is sensual, visually ethereal, all-encompassing and vivid. The story is one of love, but even more than that it’s a moment in time during a young man’s life that will shape the rest of his life and teaches him to be open and revel in his feelings, not hide from them. Guadagnino’s storytelling is fluid and the narrative simple and filled with humanistic moments that transcend the script and pull you in. Call Me by Your Name is a stronger film than the director’s last film, A Bigger Splash, and employs touches of pure emotion that will tug at your heart.

In the summer of 1983, Oliver (Armie Hammer), an archaeology student from America comes to study with Professor Perlman (Michael Stuhlbarg). While staying in Perlman and his wife’s, Annella (Amira Casar) Northern Italy home, Oliver meets the couple’s teenage son, Elio (Timothee Chalamet). A deep and unexpected romance blossoms between the pair. They spend the summer together, first as strangers, then as friends, before becoming lovers. Their relationship is generally honest, if a little awkward and stumbling on Elio’s part at first. Guadagnino focuses on the very natural human interaction as Oliver and Elio spend their summer in the sun, engaging in conversation, activity, and the authentic ebb and flow of life.

There’s an organic feel to Call Me by Your Name. It has a runtime of around two hours, but it carries its pace well and moves along in a way that makes it seem as though you’re on this summer trip with the characters. The film’s cinematography is beautiful and striking. Like the book, the narrative makes important the presence of the peaches and apricots. Whether it’s the fruit, the trees, the house, and surrounding land of the family’s residence, the setting is like another character in the story, shaping and quietly being a part of the characters’ journey.

Timothee Chalamet as Elio gives a truly standout performance. The film has good dialogue, but there isn’t as much of it as in other films. This allows the actors to better express themselves through facial expressions and other forms of body language. Chalamet allows Elio to be a fully formed character and, although he isn’t always too keen on expressing himself verbally, Chalamet allows the audience to interpret his thoughts through other means. He takes on an emotionally mature performance and it’s able to allow us to feel for him and understand him at every turn.

Armie Hammer as Oliver condescends to Elio at first and Elio takes it personally because he thinks Oliver doesn’t like him. Hammer has a less complicated character, but he seems to intrinsically understand Chalamet’s character before Elio himself realizes his own feelings. The two actors have wonderful chemistry and their relationship generally well-developed.

Call Me by Your Name is a simple, but wonderfully told story of two people who find a special connection and love with each other. Set in beautiful Northern Italy, the film is like watching a moment in time. One that is significant and allows Chalamet’s character to flourish, learn about himself, and feel more than he ever has before. The film looks exquisite and its storyline moving, its characters treated with a sense of maturity, and the relationship explored in a nuanced fashion. The film is sensual and does a great job in keeping itself grounded in the human experience. Moving and fluid, Call Me by Your Name is gorgeous to look at and natural in its romantic narrative.