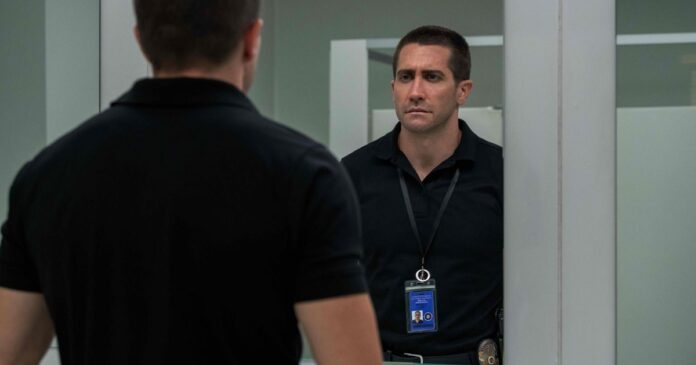 A contained thriller such as Antoine Fuqua’s The Guilty, itself a remake of a 2018 Danish film, needs a powerhouse central performance to carry it through. Fortunately, Fuqua gets one from Jake Gyllenhaal, essentially the only actor we see do anything on screen while the rest of the starry cast are only heard over the phone. A tightly-wound 90-minute exercise in high tension, the film grabs you immediately and doesn’t let go, heating up as hot as the California wildfires raging in the background.

The plot is simple and rolls out in real-time like an episode of 24. Gyllenhaal plays Joe Bayler, a disgraced cop working 911 dispatch a pending court case looms. He hates this shitty gig, and can’t help lashing out at his colleagues (poor Adrian Martinez eats a lot of it) and callers alike, the latter mainly consisting of pissed off drivers, angry johns, and people trying to steer clear of the raging wildfires. Joe, who is admittedly an asshole, just wants to feel like a real cop again, that much is also clear.

He gets that chance when a kidnapped woman (voiced by Riley Keough) calls in, desperate for help. She says she’s being held captive by her estranged husband (voiced by Peter Sarsgaard), a man with a criminal history and, judging by the fear in her voice, a penchant for violence. Something has also happened to their kids, and Joe can’t help going above and beyond the rules to save this woman and her family from certain death.

What’s interesting about The Guilty is how stealthily it tip-toes along the margins so that we’re never completely sure what’s going on. We know Joe has done something terrible to be in the position he’s in, but his guilt or innocence remains a mystery. Is his anger a sign of his character as an officer of the law? And why such a level of concern for this woman he doesn’t know and will probably never meet? Through all of his tantrums, concerning overreaches in authority, and blatant abuse of the dispatch system, he’s still someone who displays genuine concern and empathy at times. He’s a complex character to figure out, and Gyllenhaal runs through the gamut of emotions like a champ.

Penned by True Detective writer Nic Pizzolatto, The Guilty moves at a brisk pace and always keeps you on the hook. Just as you think it has nowhere else to go, a new wrinkle pops up such as an aggressive LA Times reporter who keeps calling, or Joe’s loyal-but-troubled partner who gets roped into the investigation. All of this takes place within the confines of a single office space, although Gyllenhaal is a livewire of movement in those tight quarters.

Famously at this point, Fuqua and Gyllenhaal never met during filming of The Guilty, citing COVID-19 concerns. The filmmaker was nearby working remotely from a van, and y’know, that might have been a blessing in disguise. So much of the film takes place away from Joe’s field of vision, as he’s stuck looking at monitor screens, that a similar production style seems appropriate and might’ve helped Gyllenhaal get into character. For much of the film, Pizzolatto’s screenplay is pretty grounded, but the high-minded True Detective style melodrama does emerge in the final act and it’s the only time The Guilty goes off the rails.  This is an easy, gripping watch and the second really good pairing of Gyllenhaal and Fuqua following Southpaw. Here’s hoping they keep working together because clearly they’ve got something.

The Guilty will begin streaming on Netflix on October 1st.