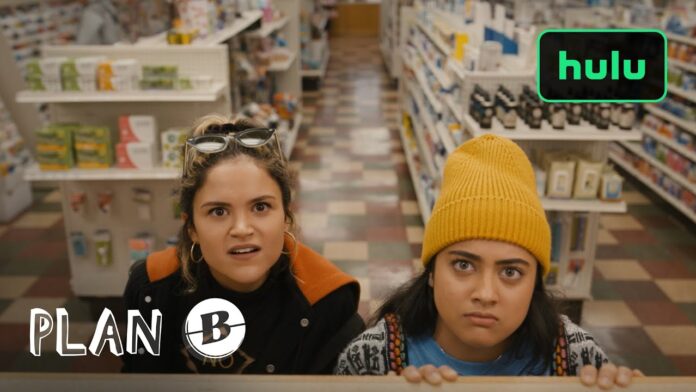 Natalie Morales (who stars in Dead to Me) makes her directorial debut with Plan B (her SXSW film Language Lessons is unreleased so far) and is written by the witty and talented team of Prathi Srinivasan and Joshua Levy. The film is from the producers of Harold & Kumar and Cobra Kai, Jon Hurwitz and Hayden Schlossberg, along with Josh Heald, Dina Hillier also of Counterbalance Entertainment, and also produced by Ryan Bennett, Jeremy Garelick and Will Phelps of American High and Matt Lottman (Big Time Adolescence). Plan B is a sexually charged teen comedy filled with ruthless quips and insane shenanigans that make you want to buckle up and embrace the chaos.

Sunny (Kuhoo Verma, The Big Sick) is a straight A student who aims to be perfect and to make her mother, Rosie (Jolly Abraham) proud but is struggling with the peak of her sexual curiosity. She desires to achieve more of a mature awakening. Her best friend and known for her bad-girl reputation, is Lupe (Victoria Moroles, Teen Wolf). She’s also the daughter of widowed and local pastor, Pedro (Jacob Vargas). Sunny’s mother happens to be out of town for the night, so the girls decide to throw a party. They invite their love interests with the intent to break out of their adolescent/virgin shells. Things don’t go according to plan when Lupe’s date can’t make it and Hunter (Michael Provost), Sunny’s ambition for the evening, ends up leaving with another girl. Feeling heartbroken and abandoned, Sunny retreats to her bathroom and finds she is not alone. Kyle (Mason Cook), is a friendly nerd but his over-the-top church-y personality permeates a creepy and uncomfortable vibe that eventually lands him hiding in the bathroom as well. Feeling a brief, mutual connection in their moment of despair, the two throw all their cares out the window and officially (well, quickly and awkwardly) do the “dirty deed”.

The next morning, Sunny goes to the bathroom only to have the protection that was used the night before, literally plop into the toilet bowl. Insinuating that her sexual encounter didn’t go as safe as initially thought and in need of a Plan-B pill ASAP, the girls are determined to fulfill this mission for Sunny. Their discretionary hunt is halted after being denied at a local pharmacy for going against the seller’s “religious beliefs”.  Realizing that the next closest Planned Parenthood facility is several hours away, the girls take Rosie’s van and hit the road. Navigating through the rural roads of Midwest America proves to be a roller coaster of insane and off-the-wall events that test their friendship, individual livelihood, and question the trust they want to have for their ‘rents.

Plan B has some great qualities that were very entertaining. This film includes the typical social awkwardness and a party bash with unintended consequences that most of us have enjoyed since featuring in the late 60’s and excelled in the 80’s. There’s an overflowing ambiance of dry sarcasm and off-the-wall shenanigans that is a big win for me. The chemistry and overall performances between all the characters are phenomenal. I love that there isn’t a one-lead dynamic either. Both girls have a secret and unknowingly share the eternal quest of acceptance and self-identity in this whole “coming of age” pursuit of life that makes this film definitely relatable. The conversation between Sunny and Hunter (Provost) at the diner is absolutely everything and by far, my most memorable/favorite scene. Another fabulous connection is when Lupe finally meets up with Logan, the gorgeous (sorry to spoil it!!!) Myha’la Herrold. They are perfect together! Plan B does not disappoint when it comes to its raunchy, over-the-top antics and there’s a wonderfully further diverse cast that includes Edi Patterson, Moses Storm, Jay Chandrasekhar, and Rachel Dratch. The soundtrack is fun too. Love Peaches!

Spanning at 1 hour and 48 minutes, Plan B is too long. Some scenes went overboard to prove its comedic value and pokes fun at the genuine concern that women face in too often a lose-lose battle regarding this dilemma. Had her mother simply talked to her in the first place AND appropriate education and resources were provided within the community, NONE of that drama would have ever had to happen. In fairness, the struggle of trying to protect and parent sexually charged teenagers and them not wanting to spill their guts yet is by far one of the most complex relationships you’ll ever have with them. That’s totally normal. Trust me, I know. I have teenage daughters!!

Plan B is definitely going to ruffle some feathers and draw attention to it’s controversial nature which could be a good thing. Or, the issue surrounding the Plan B pill could be completely overlooked having been overshadowed by the film’s need for gross shenanigans. The latter being my primary concern. Some will love it and some will hate it. Then there are people like me who are caught in the middle. We may agree that there are funny moments but feel like it still blankets the associated social stigma and casually tosses aside a genuine conundrum that often has no happy ending in these situations. Aside from all that, this movie meets all the craze of being crazy hilarious and breaks the ice surrounding this taboo topic. With that being said, I recommend that Plan B should be watched, at least once and with caution.

Plan B releases on Hulu this Friday, May 28th.

Review: ‘Princess Of The Row’