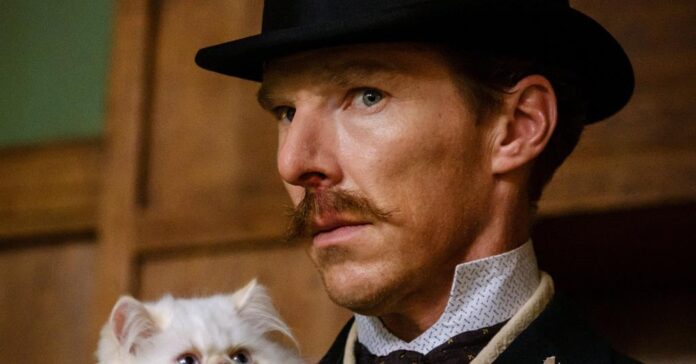 It can’t be coincidence my friend’s cat came scurrying into my room just as The Electrical Life of Louis Wain was starting, can it? The peculiar biopic about the peculiar 19th & 20th-century artist whose wonky feline illustrations convinced people to look at them as adorable housepets (Yes, there was a time when cats weren’t deemed so) features a perfectly odd lead performance from Benedict Cumberbatch. As defined by its quirks as its subject matter, the film is anything but conventional, however it’s also too weird and confectionary to hold attention for long.

In a time of Victorian England’s stuffy social mores, Wain was an eccentric oddball and probably somewhere on the autistic spectrum before such a thing was recognized. He bounced around life dabbling in various pursuits, quite poorly: boxer, scientist, etc., but found his calling as an artist, particularly of animals. His skills got him printed in a number of publications (Toby Jones plays his Illustrated London News editor), which helped him to care for his five sisters (the always-great Andrea Riseborough as one) and ailing mother. The Wain household was indeed a hotbed of misfits, and public skepticism only got worse when Wain married his sisters’ governess Emily (Claire Foy), who was 10-years his senior, causing quite a controversy.

But it was through Emily that the cynical Wain found beauty in life, and his eventual inspiration. A pet cat, Peter, that comforted Emily during a terminal illness drove the creative passion that would define his life. But Will Sharpe’s film isn’t overly concerned with just following Wain’s fascination drawing strangely big-eyed cats, than it is his mercurial mental state. Using an exhaustive combination of camera tricks and hyper-stylized visuals, the film bounds around tonally and never makes any coherent sense. Perhaps that was Sharpe’s plan all along, to recreate the whirl of emotions going on within Wain, but it also keeps us from understanding him enough to connect.

Cumberbatch is…well, he’s fine as Wain. If I’m honest, all of his quirky portrayals of geniuses look the same to me.  They’re all good, and I did enjoy the haphazard way he depicts Wain’s incredible ability to draw anything on-the-fly within moments ( a skill that kept him employed for long stretches), but in quieter scenes Cumberbatch’s Wain resmbles his Thomas Edison and his Alan Turing. Foy’s role is slight but impactful, her presence looming over the film even after she’s gone.

To its credit, The Electrical Life of Louis Wain isn’t another boring docudrama that lays itself out in cookie cutter fashion. Wain was an uncommon figure and he deserves a film that can match that spirit. But it’s also exhausting, incoherent, and less enjoyable than watching cat videos on YouTube. I guess we have Wain to thank for those, too? Well, thank you, sir.

The Electrical Life of Louis Wain will open in theaters on October 22nd, followed by Amazon Prime Video on November 5th.